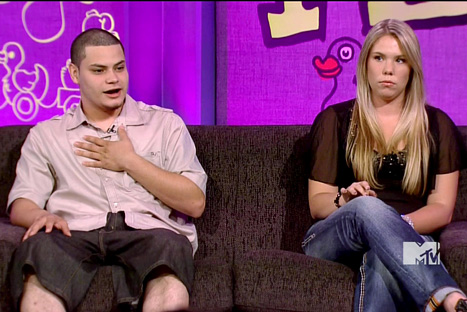 The Teen Mom 2 Reunion Finale Special Part One, which was filmed July 2011, aired last night, and we did get a few shockers despite the fact that these ladies have been living a lot of their lives in the headlines.

The first shocker is that Jenelle Evans’ mom Barbara Evans is no longer with Mike because he ran off with a Hooter’s waitress! Barbara said this while laughing, so it was hard to make out on the first try, but that’s definitely what she said. Sad to hear that happened, Mike seemed like an okay guy.

Second shocker: Kailyn Lowry and Jordan Wenner got tested and treated for an STD, which she seemed to imply she was scared she had because Jo refused to wear a condom one of the two times they had sex recently (one of the times was when she cheated on Jordan, the other time she was not with Jordan.)

It wasn’t really made clear if ANYONE had actually tested positive for an STD, (you get treated with antibiotics even if you test negative, just to be safe) but it was very confusing. In fact, at one point, Dr. Drew blurted out “Chlamydia can be very confusing,” which just made things more confusing. (Maybe there was more to this filmed that got left on the cutting room floor?)

On Twitter and Facebook Kail said that neither she nor Jordan tested positive for any STD, but that they had to undergo treatment anyway. She says she got tested because “she was with someone who did.”

“I was treated for having one because I was with someone who did. If you go to the doctor and say that someone you’ve been with has an std (depending on which it is) they’ll test you & treat you for it even if it comes out negative.”

Last night Jo tweeted this when someone asked if he got tested: “Yes. Clean. Cant say the same for some other ppl . . .”

Despite all the personal drama (and really, whether it is any of our business who does or doesn’t have an STD,) there are some lessons here. #1 Always wear a condom! #2 Get tested if you have the slightest indication that someone you were with might have an STD, or if you EVER have unprotected sex. Dr. Drew is right about Chlamydia being confusing (whether or not that was what everyone was getting tested for) because 25% of men and 30% of women can have the disease with no symptoms.

So, we do know that Kail and Jordan have a clean bill of health, word’s still out if Jo got tested.

On a more positive note, Kail’s Facebook also announced that her new website should be up and running soon.