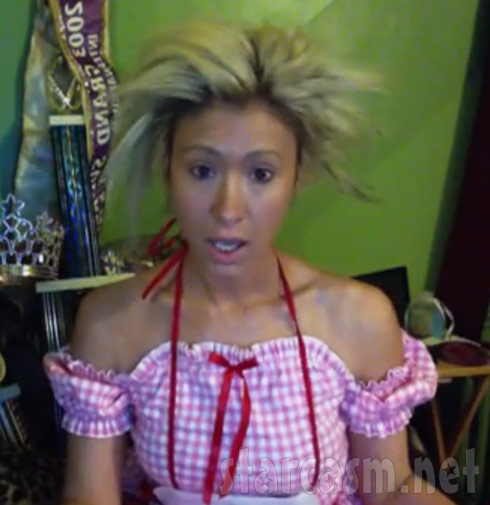 Big Brother 15 houseguest GinaMarie Zimmerman has been fired from her real world pageant coordinator job for racist comments she has made while being in the house.

In under a week, nearly half of the 16 member cast has said seriously offensive things recorded during the 24/7 live feed. The news has CBS on its heels and many calling for the dismissal of some of the contestants.

As we reported earlier here are the things that GinaMarie has said (so far):

• That, because of her income level, she receives “nig*er insurance” (she whispered the n-word, so it’s possible she said the version that ends with “a”). She whispered it to both Nick and Andy, neither of whom challenged her.

• Helen, (Asian-American house guest), “should be kissing our a*s and serving us some fu**ing rice.”

• Candice (African-American house guest) “gets that fu**in’ blackness,” referring to Candice’s reaction to something that happened in the game.

• “You know two blacks stick together. They’re like tokens.” 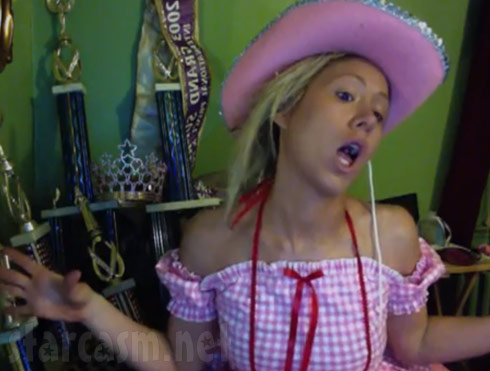 “We have never known this side of GinaMarie or have ever witnessed such acts of racism in the past. We are actually thankful that this show let us see GinaMarie for who she truly is. We would never want her to be a role model to our future contestants. In a business where we are surrounded by beauty every day we are saddened to see something so ugly come from someone we put on a very high pedestal.”

GinaMarie had a very, shall we say “revealing,” public profile before moving into the BB15 house. She’s got some semi-nude images floating around, she was a Bud Light Fantasy Girl and a Maxim Hometown Hottie (we posted on that here) and there’s a video via Vimeo (too racy for Starcasm) in which she moves around seductively in barely-there lingerie.

I don’t even know what to say about that other than there’s only one Honey Boo Boo and Alana has a lot better heart than GinaMarie. The Thompsons caught a truckload of heck when they got redneckognized for their brand of living but I’d rather hang with them than Zimmerman any day.

GinaMarie follows fellow blonde beauty Aaryn Gries in getting the Paula Deen treatment and this raises some fascinating questions. Should CBS address and/or air these horrid things that have been said on the network broadcast (wrote about this earlier)? Have the producers with CBS now told the houseguests to put a lid on all the stupid hate (my guess would be they would have to)? Will the producers inform GinaMarie and Aaryn that because of their hurtful comments they’ve lost jobs and are now the focus of many disgusted TV viewers, or will they just let them go along in the game only to let them discover the truth of what’s waiting for them when they exit the house?

It certainly isn’t the way that CBS intended, but this is shaping up to be the most fascinating season in the show’s history.