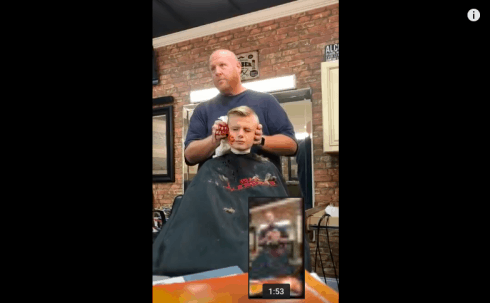 Barber Jude Sannicandro pranked his 10-year-old customer Vito by pretending to cut off his ear during a routine haircut. He set up a phone to record himself holding a rag full of fake vampire blood to Vito’s head, then having a fake ear fall to the floor, all in an effort to get revenge on the kid for pranking him with a fake cockroach. Vito’s parents were in on the deal, but it still left some people wondering if the barber had gone too far.

The boy remains pretty composed thought the ordeal, but starts to wince as Sannicandro’s act gets more convincing. Sannicandro asks Vito if he thinks a Band-aid will cover the injury, and then smears some of the fake blood on the child’s cheek.

When Vito asks for his mother’s help, Sannicandor shushes him and tells him not to tell her. But, by the time the fake ear falls the floor, Vito is yelling for his mom.

What do you think? Is this all in good fun, or did the prank get a little too severe?