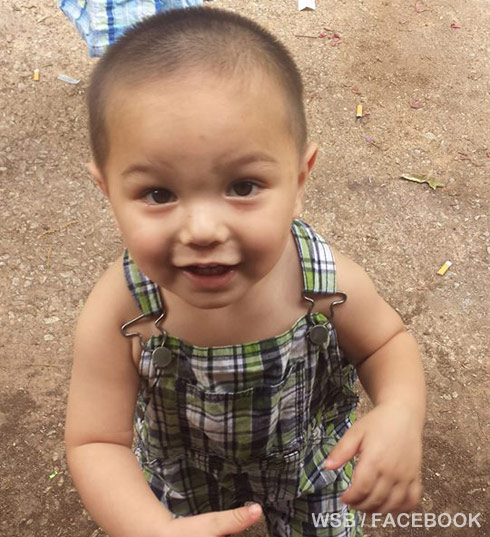 After what police are calling a “terrible accident” the parents of a 19-month-old boy say he has a 50% chance of surviving after a stun grenade was tossed into his crib during a raid in Georgia.

Authorities received information from a confidential informant that he had purchased meth from the home of Wanis Thometheva. Hours later they arrived at the residence to arrest him with a no-knock warrant.

30-year-old Thometheva, who was not home at the time of the raid, had a history with area police as he once was found with weapons including an AK-47 during a prior drug bust.

“The last thing you want is law enforcement to injure someone innocent. There was no malicious act performed. It was a terrible accident that was never supposed to happen.”

Officers had no indication that any children were home at the time of the raid. They approached the same door in which their informant had made the illegal purchase earlier. That door, which leads into a converted garage, was locked so the officers forced it open and tossed a flash bang into the room. This stun grenade device is used to temporarily distract possible combatants before entering an area.

This device landed in the crib of Bounkham “Bou Bou” Phonesavanhs who, along with his parents and 3 other sisters, were in the room sleeping while visiting from out of town.

The child’s mother said, “It blew open his face and his chest. Everybody was asleep. It’s not like anyone was trying to fight.” Bou Bou is currently in a medical induced coma and it could be weeks before it’s known if he will survive the blast, according to his parents.

The family had been misplaced from their Wisconsin home after a fire and have stated that they had nothing to do with the drug dealing that had happened at the home. They now are unsure of where they will be living while friends have set up an online fundraising page to try to help with medical bills. Bou Bou’s father said, “I hold his hand to comfort him. We’re close, that’s my boy, my only son.”

Sheriff Terrell said he had contacted the GBI (Georgia Bureau of Investigation) and was told that no further investigation would be needed into what happened.

Thometheva was later arrested at another house on a felony drug charge of distribution of meth.

Terrell added, “Our hearts are broken with them because of the child.”

Is Philip Greaves a pedophile? Should The Pedophile’s Guide to Love be censored?