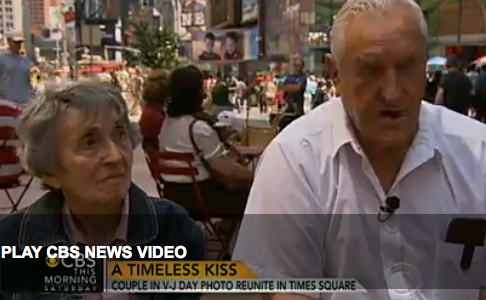 67 years ago George Mendonsa and Greta Friedman, were captured by photographer Alfred Eisenstaedt in a exuberant, spontaneous liplock. They are the nurse and sailor who kissed on V-J Day in Times Square, and the photograph is iconic to say the least. After nearly seven decades from that day, they’ve finally reunited. 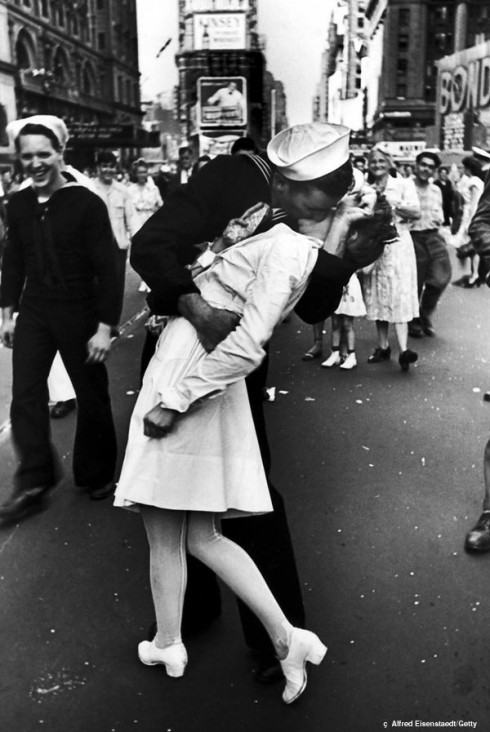 It’s a perfect photo that symbolizes victory, romance, and just the sheer joy of living. The morning of August 14, 1945, President Harry Truman announced the end of the war with Japan, and Times Square erupted into celebration. Greta was a dental assistant on break who had walked to Times Square to check out the news. She got some news alright, and she also got a kiss from a random sailor.

George was actually on a date with another woman catching a show when he heard the news at the Radio City Music Hall. They announced that the war was over, and stopped the show. George and his date went to a bar to celebrate that he wouldn’t have to return to war. When he stepped outside to Times Square, he was overcome with spontaneity:

“The excitement of the war being over, plus I’d had a few drinks. So when I saw the nurse I grabbed her, and I kissed her.”

Greta told MyFoxDC this May:

“This sailor grabbed me and I don’t know how many seconds he held onto me, but the photographer, he just made the best of his opportunity.”

Greta recognized the photo right away when she saw it in Life magazine the next week, but George had no idea it existed until 1980 when a friend showed it to him.

Since the photographer didn’t get the identity of the pair, and distinguishing facial features are missing from the photo, George and Greta haven’t been the only people to claim to be the famous nurse and sailor. George, who is now a retired fisherman from Middletown, R.I. says the proof is that his date, Rita Petrie, can be seen in the background of the photograph (can you imagine being the date?)

Rita wasn’t upset about it though, she told CBS News “Either I was dopey or something, but it didn’t bother me!”

Author Lawrence Verria, who’s studied the photo for years, believes him because all other candidates have been ruled out.

The burning question is, though, if The Kiss, was any good. According to Greta:

“I don’t want to comment on the quality. I didn’t have that much experience at that time.”