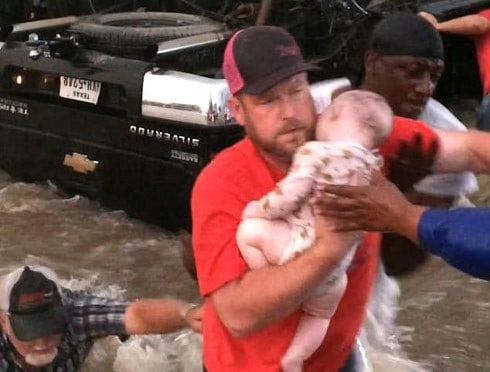 A Texas father has updated the status of his baby boy and his toddler-aged daughter after a dramatic video of their rescue surfaced online.

25-year-old Phillip Ochletree of Willis Point, Texas was driving with his two kids, infant son Marshal and daughter Addy, when his truck hydroplaned off the highway during a storm that caused massive flooding. It flipped over and the current was so intense that they became stuck inside.

Good Samaritans rushed to free them and one of the bystanders took cellphone video of the dramatic rescue:

In the footage a group of men are seen wading out in the rushing water as they frantically attempt to pry the doors open. A man in a red cap pulls the baby out from the backseat and receives help from two others to get across the water back towards where the video is being shot. 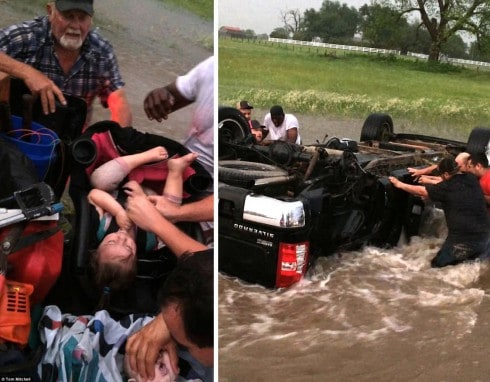 While this was happening, the rescuers were able to free the toddler as well and you can see her momentarily in her car seat next to the baby. The father is heard crying out, “[Something inaudible] my daughter!” Another man wails out “don’t stop!” as they try to get little Addy breathing again.

Phillip Ochletree has since posted two encouraging updates on their status:

Life comes at you in a blink of an eye. Last night leaving our home trying to get away from what was yet to come we hydroplaned off the highway. The update as of this moment is marshal is in excellent condition and is full of life. Addy bug right now is fighter for lack of better words. She is stable and breathing more and more on her own but it’s all up to her as to when she is ready to wake up see everyone please please keep my little bug your prayers. I can’t thank you all enough who came into the water and saved my children your a blessing thank you all so much.

Tom added in his retelling of what happened during those fateful moments, “Well the first prayer she said, I felt a response in that child.”

Sam Simon, The Simpsons’ co-creator, is terminally ill and leaving all his money to charity