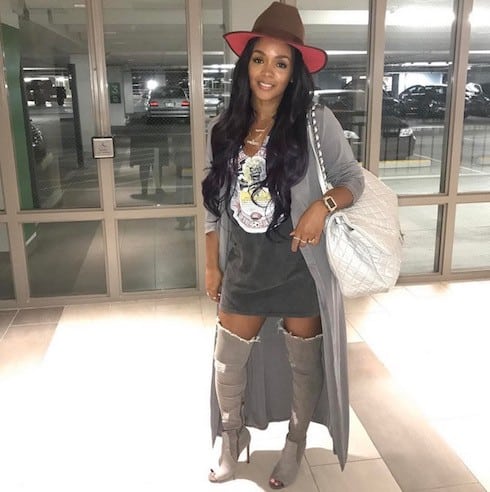 During a brand-new interview on daytime talk show The Real, Love & Hip Hop‘s Rasheeda addressed gossip regarding her alleged split from Kirk Frost, her husband of seventeen years and the father of an out-of-wedlock baby with Jasmine Washington for LHHATL Season 6. (ICYMI: VH1 accidentally confirmed that Kirk Frost is Kannon’s father; click here for the receipts.)

Rasheeda began the interview by reminding viewers of an especially important line from a recent episode of Love & Hip Hop Atlanta: during a heartfelt discussion with Tammy Rivera, Rasheeda admitted that her conflicting emotions came in part because “You can’t turn love off.” (Devotées were quick to point out that Amina Buddafly once used the same line of logic to explain why, in spite of everything between herself and Peter Gunz, she still loved him and called him her “favorite person.”)

Co-host Jeannie Mai also brought up the recent LHHATL episode featuring Kirk blaming his cheating ways in part on Rasheeda’s postpartum depression and “coldness” in the bedroom–but Rasheeda had a whole different kind of frigidity for that line of thinking. “You know what?” she said, putting up a hand and drawing boisterous applause: “Do we expect anything less when a man is in the hot seat?”

Rasheeda added, “You can’t put the fault in anyone else when you, yourself, have totally made the wrong decision.”

One note of particular interest came in the exchange preceding Rasheeda’s dismissal, when Mai referred to the “estranged” husband Kirk Frost and Rasheeda didn’t correct her. The topic of divorce didn’t come up, but, ever since Rasheeda and Kirk did a paid appearance together a few weeks ago–marking the first time they had stepped out as a couple since the baby daddy allegations broke–the popular rumor was that they were still together. While it looks like a formal split is still possible, we now have confirmation both that the two are living apart and that a reconciliation may not be as close at hand as previously thought.

Elsewhere in the interview, Rasheeda discussed her recently revealed postpartum depression, advising everyone watching her interview to “Be as vocal as possible and speak to people. The more support you can get, the more help you can get….At first I was like ‘I don’t want to talk about it; does that really happen to people?'” Rasheeda also said she’s been overwhelmed by the amount of fan mail she’s gotten from LHHATL viewers (“Do people still write letters?” she asked, in a lighthearted moment; “Yes, they do.”) who told her that her postpartum struggles have helped them deal with their own and “get closure” for themselves.

“Don’t be ashamed,” Rasheeda said in conclusion; “work on trying to get better.”

(Photo credit: Did Rasheeda and Kirk split via Instagram)