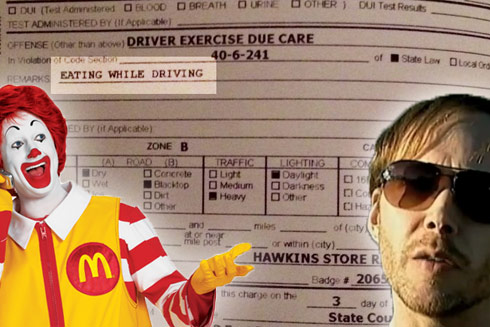 An Alabama man was issued a citation in Cobb County, Georgia for enjoying a Double Quarter Pounder with cheese while driving.

“The officer explained to me that he observed me eating a burger for 2 miles. He said specifically three times, you can’t just go down the road eating a hamburger.”

Turner provided a copy of his ticket and sure enough the remark listed by the officer was “eating while driving.” The citation was issued under Georgia’s distracted driving law which reads, in part:

“A driver shall exercise due care in operating a motor vehicle on the highways of this state and shall not engage in any actions which shall distract such driver from the safe operation of such vehicle.”

Turner, who intends on fighting the ticket, added:

“Maybe I was enjoying the burger too much – I needed to tone it down. I was certainly willing to do so but I didn’t expect to be fined or punished.”

WSB followed up with longtime local traffic and DUI attorney William Head to get his thoughts. Here’s what he had to say:

“If this was the law, I’d have to hire more attorneys because everybody does it including me. I’ve only seen something like this charge when there’s an accident.  There was no accident here so the fact that this man was charged with eating and driving is a first for me… Maybe if you had a giant pizza in both hands and you weren’t holding the wheel or maybe if you had a watermelon, half watermelon and you were just diving into it holding it with both hands, maybe that would be something.”

Turner said that he was not exceeding the speed limit or driving erratically at the time.