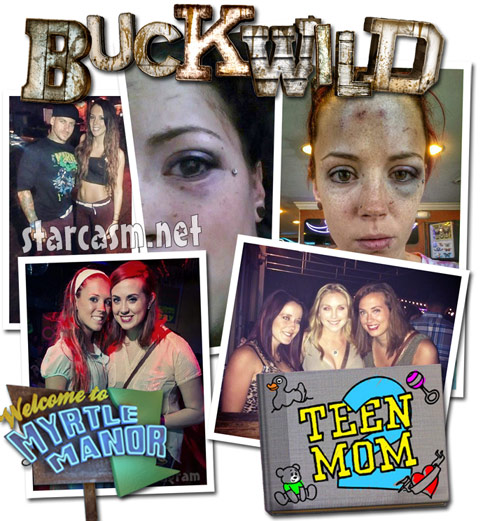 As we reported last night, reality shows collided in Myrtle Beach, South Carolina earlier this week and the result was dramatic and violent. We first became aware of the incident when Katlyn “Kat” Scholato, girlfriend of Welcome To Myrtle Manor‘s Taylor Burt, tweeted graphic photos of her facial injuries she says were the result of an altercation with her roommate, Buckwild‘s Anna Davis. Anna Davis has since moved out and is now living with Teen Mom 2‘s Jenelle Evans, who got involved in the online war of words defending Anna. (Catch up on all of that, and see the original photos, in our previous post at the link above.)

Anna later spoke out and revealed she and Kat did get into an altercation after having some drinks and arguing over normal roommate things. But Kat has just shared her side of the story, that has since been posted on therealteenmomtruth.com.

Anna and Kat agree that there were two altercations — one on the evening of May 5, and the other the following day. Kat says the initial confrontation occurred after Anna had been celebrating Cinco de Mayo all day (“from 2pm to 9pm”) and needed a ride home because she was too inebriated to drive. Kat says she left work early to pick Anna up and bring her home.

Kat indicated that she “had a few sips of wine” when the roommates later began to argue over who did or didn’t buy paper towels back at the apartment. Kat says this led to Anna saying negative things about Kat’s boyfriend, and their roommate, Taylor, who was not present.

Around this time Shae left and went to her room to go to sleep.

Things calmed down a bit, until Anna pulled her dog onto the couch even though “the one rule in the house was to not have the dogs on the couch.” The two began to argue over it and things escalated to the point that Kat suggested that Anna move out. From The Real Teen Mom Truth:

Anna got in Kats face while she was sitting Indian style and said she was going to punch her and the next thing Kat knew she had Anna on top of her punching her multiple times on the side of the head. Kat tried to fight back in self defense but the weight difference (Kat: 115 – Anna: 170) made it difficult. Eventually Kat managed to get a hold of Anna long enough to have the other friend who was present get Shae and get Anna off Kat. Once she did that, the police were called. Kat waited outside. When the cops arrived they told Kat that SC has a no self defense law and since she fought back to get Anna off of her, she too would have to go to jail. Kat did not want to get a 3rd degree battery and assault charge for getting beat up so she told the police she just wanted Anna out of the house for her safety. They then proceeded to tell her that she’d need to file for eviction would would take 30-45 days since Anna was a guest for longer than 5 days.

The girls went inside and went to separate rooms. (Anna did not leave like Jenelles article stated – her car was over 5 miles away).

The next morning Anna texted Kat from the other room saying they needed to talk, and Kat felt that there was no excuse and nothing to talk about so she responded by politely telling Anna that there was nothing to talk about, she was dead to her and that her and Taylor both wanted her to move out. She also gave her the option to either move out on her own or to do it through court. Anna then told Kat to stop with her sob stories and that they both were involved in the fight and that she was at fault. Kat walked outside and said to Anna, now furious with her lack of sympathy, that she should get out of the house immediately and she could not possibly believe that it was a back and forth fight when Anna had at least 50 pounds on her and that she wasn’t able to possibly defend herself when she had someone that much bigger on her. Anna got up from the porch, put Kat through a wall and hit her in the face a few more times before Taylor came and broke up the fight pulling Kat into their bedroom they shared together. Anna continued to mouth off so Kat finally defending herself did the same. She told Anna that she was trash, has slept with more guys in the two months she’s lived here than Kat ever did in her life, and told her that she was a bad person for having an abortion. Anna then broke through the bedroom door while Kat and Taylor were changing to leave the violent situation and Anna attacked her again. Taylor again ripped Anna off defenseless Kat and put her in the closet while he got Anna out of their room.

The two left for the day trying to figure out legally what could be done and again found that since Kat defended herself by hitting back, she was unable to do anything other than file a report. When they returned hours later, Anna was packing her belongings to move out.

Jenelle reportedly got involved a couple of days later as she and Kat exchanged heated text messages. That led to Kat posting the photos on Twitter and here we are.

Kat confirms she and Taylor have since split up, and she accepts that it is “because he has asked her not to drink and she did.” But she also points out that she and Taylor “have lived together for over a year. Taylor did all he could to support Kat during this and he had nothing to do with the twitter fights. She also said that he was there for her when she needed him.”

Kat has since deleted her Twitter account, with her last tweet reading, “if this is what being in the ‘spotlight’ is like.. I want nothing to do with it.. my kitten and I are going into hiding. Bye.”

You can read the entire side of Kat’s take on the incident over at The Real Teen Mom Truth.

TEEN MOM 2 Jenelle Eason pulls gun on man during road rage incident with Jace in the vehicle, according to police report

PHOTOS Kailyn and Javi get new tattoos including Isaac, Lincoln and a hummingbird