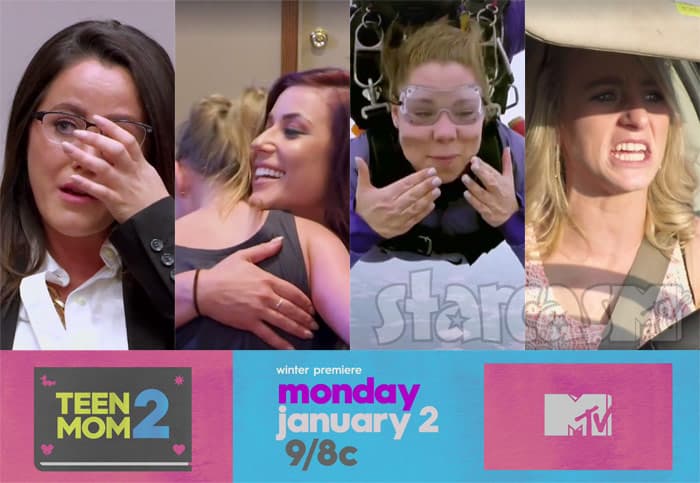 Monday night is the Teen Mom 2 Season 8 premiere, and in honor of the New Year holiday, MTV has been sharing preview clips for the upcoming season with a “resolutions” theme. So far we have four videos with resolutions 10-7, which includes previews of all four moms! So, without further ado, let’s start the countdown…

Aubree reads a card that reveals her mom is pregnant and that she is going to be a big sister!

* Don’t just read the sentence and move on — you HAVE to watch the clip! Would it motivate you more if I told you there was a photobomb from reality TV’s most famous oinker? 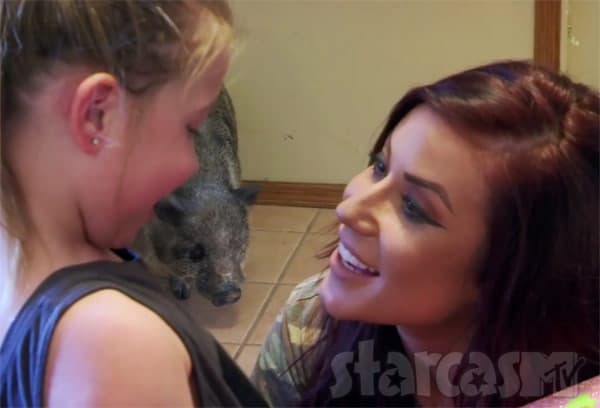 “Some people dye their hair when they go through changes in life, some people jump out of a f***ing plane,” Kail says as she suits up for skydiving. “This is a quarter life crisis,” she jokes. Then, she jumps out of a plane!

Resolution #8: Be your own support
Leah Messer

Leah Messer and a gal pal are traveling with Adalynn in the back seat. Leah and her pal are having one conversation about Jeremy’s engagement, but Addy seems to be having a completely different conversation(s) all on her own. Eventually they get on the same page when Addy reveals she wants a boyfriend. Addy also asserts that mommy needs a boyfriend, but mommy doesn’t agree. “No! Ewwww!” Leah says before adding: “I’m my own boyfriend.”

This is a court room scene in which Jenelle testifies in her own defense after being charged with assault for hitting Nathan Griffith’s girlfriend Jessica Henry in the face with a water glass. Jenelle breaks down in tears after revealing Nathan’s threats to take their son Kaiser away — but Jenelle’s tears are met with much shaking of the damn heads from Nathan and Jessica. (SPOILER ALERT: Click here to find out what happened!)