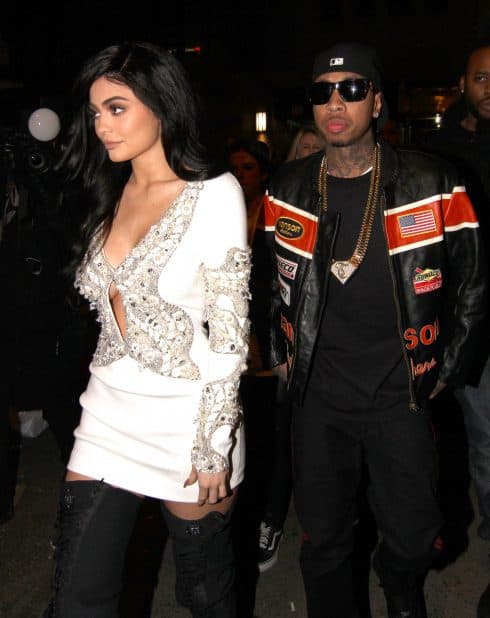 21-year-old Kylie Jenner is reportedly worth almost a billion $ thanks to growing up on reality television and in the shadows of her older sisters’ huge fame. She was able to monetize this fame into a blockbuster cosmetics brand, but her ex boyfriend Tyga says he’s the one who helped Kylie build her wunderland empire. He admits that she was “destined to be somebody, regardless,” but credits his input about things like how she wears her hair to really helping her skyrocket.

“I will say about this is that if you look at the before and after” 28-year-old Tyga said on “Beat 1 with Apple Music.” “When I stepped in, I said you should wear your hair like this, etc.”

Tyga and Kylie started dating in 2015 when she was still a minor: 17-years-old to his 25 years, but their two-year relationship became more public when she turned 18. After on-again, off-again dating they ultimately called it quits around April 2017 and soon after that, Kylie started dating her current partner – herbaby Stormi’s father Travis Scott.

It was a lot of stuff, but I’m not a bitter type of person, because the universe will pay me back,” Tyga elaborated about the relationship, hinting at some sort of karmic payback. “We had a good time, but we kept it moving. We’re both doing good.”

While Kylie is approaching billionaire statue Tyga has a number of financial and legal issues on his plate, one of which is child support for ex Blac Chyna, who also has a child with Kylie’s brother Robert Kardashian Jr.