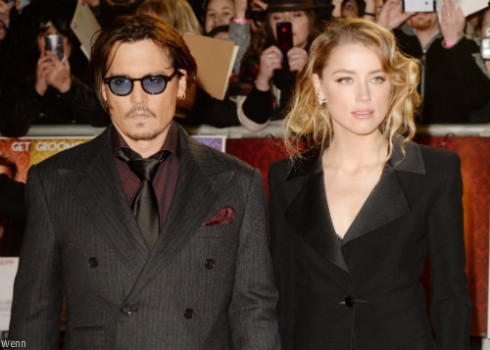 Two months after tying the knot (twice!), Johnny Depp and Amber Heard’s relationship is reportedly worse than ever.

“It’s not surprising that they haven’t spent much time together, because they seemed to have a lot of relationship problems in the months leading up to the wedding,” a source close to the couple told People, explaining the newlyweds have only spent a few days together since the weddings. “When the wedding finally happened in February, it had been postponed several times. … Amber had her wedding dress for months before they settled on a wedding date.”

Much of Johnny and Amber’s time apart from each other can be attributed to work schedules: She had to cut the honeymoon short to begin filming The Danish Girl in London while Johnny was filming Pirates of the Caribbean: Dead Men Tell No Tales in Australia.

“As soon as Johnny arrived in Australia, he was partying hard,” another insider said.

That was cut short in February when Johnny injured his finger and had to fly back to Los Angles for surgery. Production was supposed to begin again last week, but Johnny never showed up.

“There are rumors on the set that he was in rehab,” the second source said. “Everyone is anxiously waiting to see what will happen this week.”

Meanwhile, openly bisexual Amber was seen partying with “close friend” Io Tillett Wright in New York City last week — which supposedly didn’t sit well with Johnny. One source told Page Six Johnny thought the women “were spending too much time together for it to be comfortable.”

Reps for Johnny and Amber didn’t return either publications requests for comment.