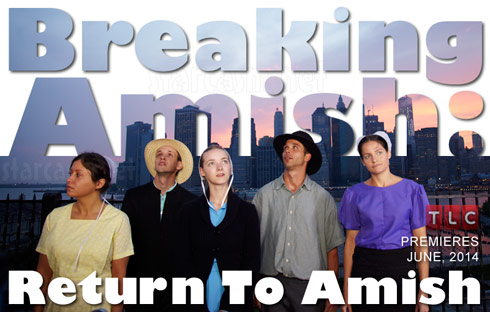 We previously reported that the cast of TLC’s original Breaking Amish reality series was recently seen filming again, and now the network has confirmed fans will soon get to see Abe, Rebecca, Jeremiah, Sabrina and Kate on our televisions again in what they are calling a “spin-off” series (???) with the working title Return To Amish that is set to premiere some time in June.

Here is the full press release from the network:

(New York, NY) – TLC’s highest-rated freshmen series ever introduced viewers to five young men and women who chose to leave their sheltered Amish and Mennonite lives to experience New York City together for the first time, and then followed them as they traveled south to Sarasota, FL. TLC is now in production with a new spin-off series that follows Abe, Rebecca, Sabrina, Jeremiah, and Kate as they continue to acclimate to their new lives while still applying some Amish traditions to holidays and major life events. Mary, Katie Ann, and Andrew all return as well, and viewers are finally introduced to Chester (Mary’s husband), Chapel (Andrew’s girlfriend) and Kayla (Rebecca’s daughter). The network has ordered six hour-long episodes, slated to premiere in June 2014.

Since the Sarasota trip, the entire group has decided to return back to the PA area with the exception of Kate who has decided to stay in NYC. With two new babies on the way, the original group is growing fast. Abe and Rebecca prepare to welcome their baby into the family with both Amish and English traditions as they continue to adjust to married life. Viewers will also be a part of Sabrina’s journey as she goes through the ups and downs of her pregnancy. Jeremiah’s love life and current job situation is also highlighted throughout the new series, as is Mary’s ongoing struggles with being shunned by the community. And as Andrew is newly released from jail, he tries to start fresh with his on-again, off-again girlfriend Chapel, as well as his relationship with his entire family – a work in progress at best. Cameras also follow Kate as she officially becomes a New Yorker – living on her own, dating in the big city, and continuing with her budding modeling career.

RETURN TO AMISH (working title) is produced by Hot Snakes Media for TLC.

So glad to hear Kate Stoltzfus is on board as well! She was not seen filming with the rest of the cast back in early February so it was unclear if she would be included. (Which seemed to make sense given her continued success in professional modeling.)