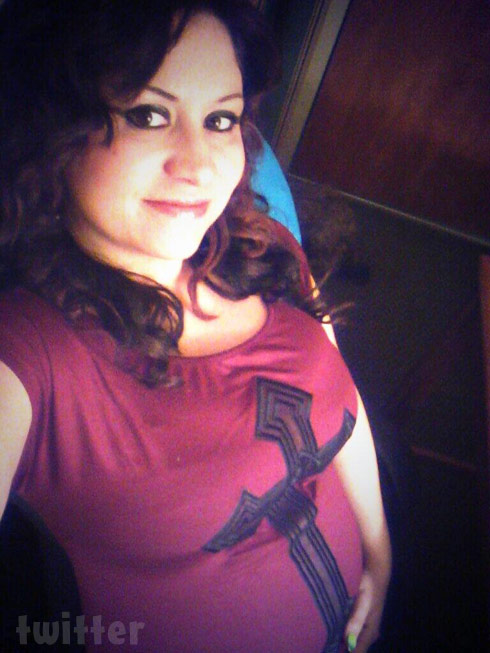 We broke the news in December that Breaking Amish star Sabrina High (although she appears to be going by Sabrina Burkholder again now) was expecting her first child with boyfriend Harry Keiser III, and this week the expectant mom shared her first pregnant belly photo with fans on Twitter along with the simple caption, “Baby bump ♥”

In the photo you can see Sabrina, who has apparently gone back to being brunette after a stint as a blonde, is literally glowing as her pronounced bump stands out underneath a maroon-colored shirt with a cross pattern design. It’s uncertain exactly how far along Sabrina is, but Harry shared a sonogram of a well-developed fetus all the way back on November 12 — so that may give you some idea. 😉

Sabrina had taken a hiatus from social media, but returned to Twitter once it was confirmed she was pregnant at the beginning of this year. Since that time, she has been tweeting up a storm, including updates on how her pregnancy is going as well as lots of PDA with Harry, who joined in on the Twitter fun on January 23.

The couple’s playfulness was evident right away:

Harry, whose account is private, responded by writing, “thanks for welcoming me baby love!!! You are the sexiest pregnant woman ever!!! I love you soo much hot stuff! !!!”

Of course, within hours Harry and Jeremiah Rabor got into a bit of a Twitter fight resulting in some rather not-so-subtle replies from Sabrina and Harry:

Just a suggestion. If you cant take care of your life and kids, maybe you should focus on that instead of chasing fame. #priorities

But, as I mentioned, Sabrina has also been sharing pregnancy updates — and as fans of the showprobably know, she rarely holds back:

@AndreaPartland well I’m pregnant so ive been sick an awful lot. Basically my days consist of trying to keep my head out of the toilet lol

@sanchezmomma yes. One minute im sobbing the next im laughing and the next im ripping @Harry_The_3rd‘s nutsack off with a fork lol

Any suggestions on how to get rid of piggy ankles??? They’re so swollen they look like tree stumps!!!! 🙁

Fell n busted my butt on the sidewalk last night. Ice n pregnant women dont mix. So sore this morn. Can hardly move nor do I want to.

The sad part about falling now is that I cant get back up on my own. Felt like a turtle on its back. Thank Jesus for cell phones.

Thanks everyone for your concern! Went to dr.. Everything is fine 🙂 just mega sore!! And a shiny purple backside. Lol how festive.

I wana give a shout out to my boyfriend @Harry_The_3rd. My ankles were huge n so he bathed n iced them n even clipped my toenails for me ♥ 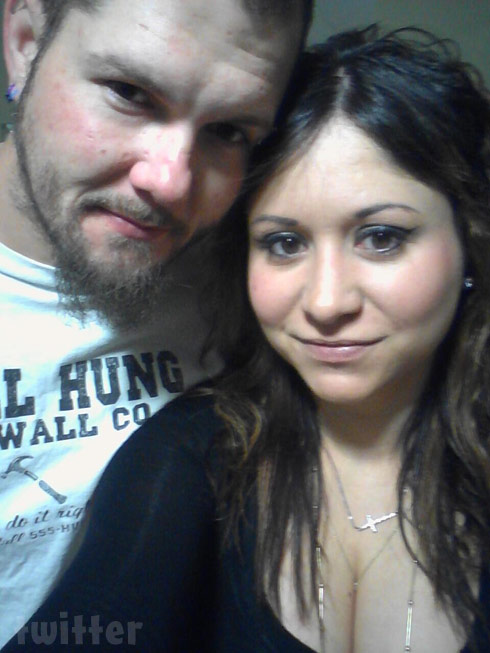 For those of you curious about Sabrina and Harry’s reconciliation after their much-publicized falling out (and Harry’s arrest!) he got into a rather lengthy conversation with a follower on Twitter about the whole thing, which began after Jeremiah got upset over a retweet:

HARRY: poor jeremiah he’s going to be furious when he sees this

FAN: well its what happens m8 when you mouth off. Not as if use are lying though use are speaking the truth

HARRY: he underestimated how good a team @sabrina_lelia and I make. We were made for each other

FAN: so true. I can see that he defo ain’t getting in between use again

HARRY: he never really was in between us in the first place

FAN: just the way the tv show showed it. You fought your corner and quite clearly was the better person and have respect

HARRY: well ty I appreciate. I did f*** up later big time, but im constantly trying to better myself and make up for my wrong doin

FAN: people like to judge me for it like they are perfect and better than me. We just cant see the skeletons in their closets

HARRY: my closet became very public because of the show. Atleast Sabrina is a bigger person then them and able to forgive me

HARRY: for that I love and cherish her

FAN: no 1 is perfect. We all make mistakes some big some small. As long as you know you have done wrong and try to better yourself

FAN: who has the right to judge you. You have your wee family now so just concentrate on them and make sure use are happy

FAN: who cares what others say as long as your family is happy.

HARRY: your correct man. Thats the truth. And atleast im able to be honest with myself and own my actions

HARRY: others arent quite able to do so and deny any wrong doing their ex wives say they have done

FAN: new year new start m8. Look onwards to the great times and the future. Learn from your past and try not to make same mistake

I have to agree! Congratulations to Sabrina and Harry — we wish them both (and their daughter/son) nothing but the best!