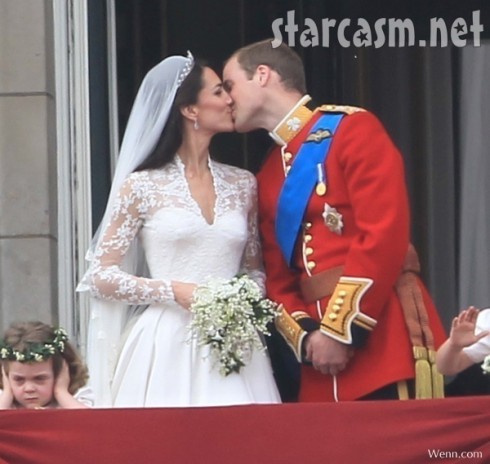 The Royal Wedding is a real life fairytale. Or, at least a real life production of pomp and circumstance that can no doubt be uncomfortable, boring, and noisy!

Almost every news photographer in the world was at Westminster Abbey this morning to catch every nanosecond of the Royal Wedding between Prince William and Kate Middleton (now known as Your Royal Highness, The Duchess of Cambridge; or Princess Kate, someday to be Queen Catherine.) The princess was lovely, and wore a gown inspired by Princess Grace’s wedding gown (and also, was kind of a nod Disney princess attire, but don’t tell anyone I said that.) The prince was taunting any bulls who might be watching the wedding on DVR with his bright red honorary rank of Colonel of the Irish Guards uniform. There were even $90,000 worth of trees in Westminster Abbey!

Everyone was on their best behavior after having memorized the 22-page etiquette book sent out with the invitation. Grace van Custem, 3-years-old, however, can’t yet read that mess (who would want to?) and went with her human instincts while standing on the balcony for the highly-anticipated First Kiss!

Grace is the goddaughter of Prince William. Because there are no flower girls in royal weddings, young girls can be bridesmaids. Grace comes from an impressive lineage: she is the daughter of Lady Rose Astor and Hugh van Cutsem, and is the great-great-great-granddaughter of William Waldorf Astor, an American lawyer and politician who became part of the British Aristocracy. He had a side project called the Waldorf hotel.

Grace is now such an internet sensation that’s she’s a meme! Is this is photobomb of the century?