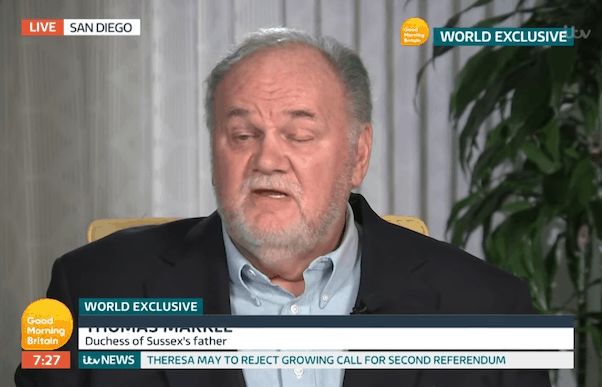 CELEBITCHY – In case the decay of their relationship wasn’t already bad enough, we’re about to get Thomas Markle vs Meghan in court, too. It looks like Thomas — who, in case you forgot, is Dutchess Meghan’s father — is prepared to testify against his daughter in Meghan’s defamation lawsuit against the Daily Mail. Over the past year, Thomas has shown himself to be fairly unreliable when it comes to spinning a narrative; if I’m the DM, I can’t be thrilled about having him take the stand

LAINEY GOSSIP – In related Sussexit / Megxit news, Prince William and Catherine were near peak pettiness while stepping out for the first time since the shit hit the fan

VOX – Lev Parnas, Rudy Giuliani’s associate and co-crime-doer, Ukraine Division, just turned over a bunch of documents to the House Intelligence Committee detailing more Ukraine-related crimes he and Rudy Giuliani did at Donald Trump’s behest, some of them literally written out in longhand on fancy hotel stationary. This is like when the FBI raids the Kansas City headquarters in Casino and finds all the evidence they need literally written out in notebooks

DLISTED – Worth the click for this article’s very excellent opening sentence alone: “It seems that Josie Canseco’s thirst for douche fumes knows no limits”

GO FUG YOURSELF – The thing that makes this lowkey my favorite headline of the last few days is how perfectly, compactly understated the joke is

THE BLEMISH – I almost hate to direct quote so many times in a single links post, but here’s another strong contender for Headline Of The Week: “Do You Wanna See Flume Eat Out Lizzo’s Butt?”