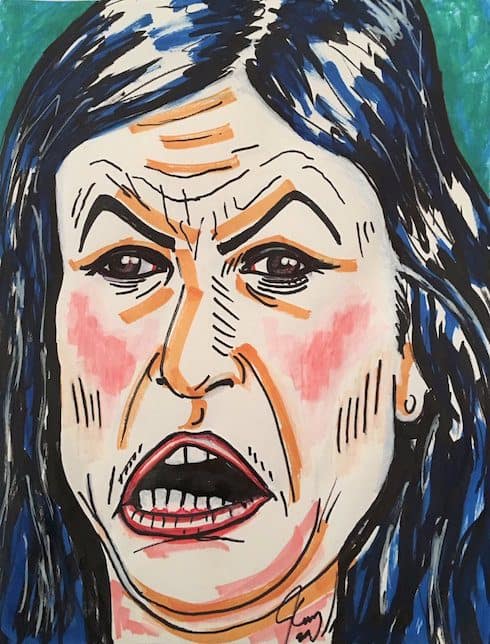 DLISTED – Jim Carrey pissed off 46% of Twitter by sharing the above portrait, which he drew and which is allegedly (definitely) of Sarah Huckabee Sanders. IIf his Hollywood career actually does suffer as a result, at least Carrey can look forward to life as a Venice Beach caricaturist

JEZEBEL – Back in 2013, in the aftermath of what we now know was an affair with Donald Trump Jr., Aubrey O’Day wrote a song called “DJT.” Nobody thought much of it at the time. Now, lyrics like “You have to tell me you love me / I don’t ‘cause you’re a f*cking pain in my ass” have taken on a whole new meaning

REALITY TEA – Kim Zolciak thinks the rest of the Real Housewives all met up before the reunion to strategize how they would gang up on her. After reading this article I’m inclined to agree, if only because it would probably be fun

THE BLEMISH – Instead of driverless Ubers, can we have a future dominated by high-speed trains instead? They would still do the job of helping you not have to pay attention to the road while you traveled, and the views would be much prettier. Plus, no driveless Uber pedestrian killings

VOX – So it turns out that regardless of what Robert Mueller uncovers, it’s possible that his findings will never be made public. Though you have to assume, given the volume of leaks associated with this administration, that at least some sizable portion will make its way to the press

VERY SMART BROTHAS – Here’s a helpful reminder for all people — but especially celebrities, who are mostly people — that if you go public with a private mess, that mess is now an open topic of conversation

UPROXX – The Weinstein Company is the middle of filing for bankruptcy. One of the things it has to do in order to file is nullify all existing non-disclosure agreements. Expect to hear even more sexual misconduct stories about Harvey Weinstein and Weinstein-adjacent execs in the coming weeks