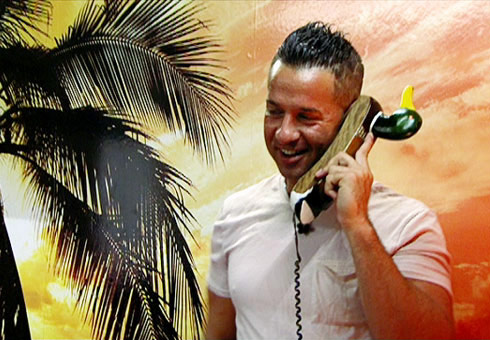 As we reported yesterday, former Jersey Shore star Mike “The Situation” Sorrentino was arrested Tuesday after reportedly getting into a brawl with his brother Frank Sorrentino at the family’s Boca Tanning Salon in Middletown, New Jersey. Thanks to the ever-diligent Jersey Shore-ologists over at TMZ we now have the audio from the 911 call placed by a customer of the tanning salon.

Here’s the call followed by a transcript of the conversation:

CALLER: I’m a customer at Boca Tanning and, like, the owner is here and him and his brother are in a fist fight with, like, family trying to pull it apart in the back.

911 OPERATOR: Where are they? Inside the store or behind?

Yeah, they’re inside the store, in the back of the store inside.

And how many people are fighting?

I don’t know. I just know that it’s Mike and his brother Frank.

And it’s an actual fist fight?

There’s girls screaming. I just [inaudible] asked me to call.

The people next door at UPS are [inaudible] they walked over while I was calling.

What? Do you know if they have any weapons or anything?

I have not idea. I just walked out. I heard screaming and I walked out the front to call you because I didn’t want anybody to hear me calling you.

Okay. Did you actually see them fist fighting or just –

I just went — I looked back and there were girls screaming and they were all down the hallway, and the sister’s here and the girlfriend’s here and —

I just — they were, they just had each other.

They had each other. I literally just kind of walked out of there.

What do you mean had each other? What does that mean?

They were holding on to each other.

Okay. So you didn’t see them actually, like, throwing fists at each other?

My — can I just tell you my adrenaline’s pumping so high I just literally, just walked out.

Okay, because you told me that they were fist fighting in the beginning.

I just — that’s — someone just, you know, there are people all around, and I was the one that made the call.

Do you still hear them yelling or anything?

I do hear them yelling still. The UPS lady is from next door, and she was — they were, like, bouncing off her wall. Like I said, I just was the one that made the call because I had the phone out.

Alright, I’ve got a few cars going over there.

Just let me know if they come outside or anything like that, or if, you know…

…you hear anything else, you know.

I just walked into the UPS store next door. Um, someone’s out.

The sister and the girlfriend are outside.

They’re screaming out the door, I’m next door at UPS. I can just hear the screaming.

Okay. There should be an officer there in an unmarked car. Do you see that?

He should be pulling in.

Oh my God. Just stay in here, because, I don’t know, they’re right in the doorway. I’ll stay right here.

Here’s the unmarked car, it just pulled up.

Okay, just let them know that you were the caller, okay?

I mentioned in our post yesterday that it seemed a bit convenient that this “fist fight” occurred less than a month before the premiere of The Situation’s new reality series The Sorrentinos on TV Guide network, and after hearing the 911 call I’m all but convinced this was just publicity stunt for the cameras:

I just — they were, they just had each other.

UPDATE – The Situation posted a photo on Twitter with his (I assume) broken hand wrapped in bandages:

Dr. situation; Sir your hand is broken! Damn it ; Joke …Well what did the five fingers say to the face! pic.twitter.com/ESZ0dKvxhQ

The Sorrentinos premieres Tuesday, July 15 at 10/9c on TVGN. Click here to watch the trailer and find out more!

Why did Ronnie and Sammi split? Did Ronnie cheat with Morgan from Bad Girls Club?