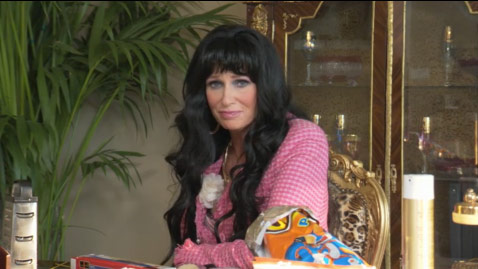 One of the highlights from Sunday night’s Primetime Emmy Awards was Jane Lynch’s sketch paying homage to the influence of the state of New Jersey on television over the last few years, something for which her Teresa Giudice inspired alter ego Donatella Alberghetti Mangiana D’Borgia takes credit.

Here is a clip of the Anderson Cooper narrated skit from the Awards in which Ms. D’Borgia proudly points out, “Thanks to me now 50% of all television is now set in Jersey.”

The cast of Jersey Shore and The Sopranos actor Vincent Pastore (who played turncoat Salvatore “Big Pu$sy” Bonpensiero) joined in on the fun and provided some hilarious one liners such as Pauly D’s shocking admission of admiration, “She’s like a mother to me. Because she killed my mother.”

BUT, as it turns out, a lot of the funniest lines got left on the cutting room floor, as evidenced by this outtakes reel that surfaced online today!

Here is the clip transcribed in case you’re at work and your evil bosses have blocked Youtube. (I’ve bolded my favorites.)

Donatella: My nickname in high school was Beef Jersey because I was constantly in the tanning booth… AND I didn’t get along with anyone.

The Situation: She tried to change Sammi Sweetheart’s name to Sammi Streetfarts

Donatella: That little Snooki, she’s my prize little veal. Snooki’s feet haven’t touched the ground in a year and a half.

Pauly D: I saw her knock out a donkey once.

Vincent Pastore: I once saw her f*** a donkey.

Donatella: Vinny’s like a shark. He used to eat 15 pounds of raw beef a day or he’d die.

Ronnie: She had us change our real names.

Vinny: I was Maechelle Tannenbaum

Ronnie: I was Weezy Jefferson.

Pauly D: She scares me so.

Vincent Pastore: That Donatella, her ass is like a loaf of bologna. She grinded right through my pants!

Donatella: Sammi is like an ant, she can lift fifty times her own weight. Sammi is an accomplished clown. Every six months Sammi sheds a tan. I saw Sammi eat a Jeep on a bet. Sammi can eat a quarter and crap out two dimes and a nickel.

Donatella: Bruce Springsteen? Actually from Thailand. Full-blooded Thai. But we embrace him as a Jerseyite because he makes such good goddamn music, that Asian bastard!

Ronnie: Donatella found me, for real, living in a walk-in freezer and wearing pants woven together out of linguini.

Donatella: Because I am the liaison.

Ronnie: Donatella, she is the laizee.

Sammi: I hear that she refers herself to the liaison

Deena: They call her the layz – leeuh – solee ahhhh…

Donatella: My hair weighs 45 pounds. You know what I do to get this color? I lay in the tanning booth until I smell chicken.

Donatella: What am I going to do with all my money? Build a stairway to the moon so I can get the f*** out of Jersey.