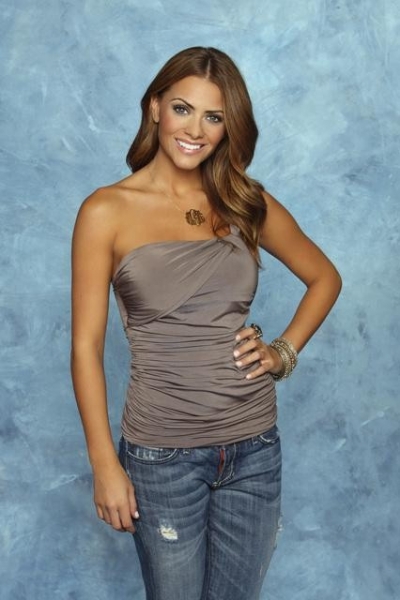 The Bachelor 15 contestant Michelle Money is a 30-year-old hair stylist, model and actress from Salt Lake City, Utah. The sexy brunette was born Michelle Cartwright before marrying Ryan Money and taking his name. The divorced couple share a five-year-old daughter named Brielle. CLICK HERE for a photo of all three of them together in 2007.

Michelle’s most recent acting project is in the film Midway to Heaven – you can read more about that, including photos of Michelle and a trailer, HERE.

UPDATE – Since the announcement was made that Michelle Money would be appearing on the show there have been a number of unpleasant stories circulating about her and her break-up with ex-husband Ryan Money. One rumor was that she had an affair with NBA player Carlos Boozer of the Utah Jazz while both of them were still married. Michelle has since fessed up to the affair, telling Life & Style, “Yes, I was in a relationship with Carlos while he was still married. What I did was wrong.” According to Michelle the affair occurred after she had split from her husband and Carlos led her to believe he was separated from his wife CeCe at the time.

*** There is also a rumor that Michelle recently told people she was with at an NBA game that she was paid by ABC to act the way she did on the show, which is believable given her over-the-top villainous persona.

Michelle talked with ABC 4 about her experience on the show and people’s inevitable negative reactions:

Here’s a brief but fun Q&A with Michelle Money from ABC:

If you were stranded on a desert island what 3 things would you bring and why?
Tweezers – I have hair that grows out of a mole on my face that totally bugs me!
My iPod – I love music!
Bobbi Brown Hydrating face cream – I can’t live without it!

What is your favorite all-time book and why?
Eat, Pray, Love

Do you consider yourself a romantic and why?
Yes. I’m pretty romantic. I like sexy music and sharing feelings and mood lighting and all that fun stuff!

What is your ideal mate’s personality like?
Funny, confident, easy-going, compassionate, confident and Confident!

What’s your biggest date fear?
Not having good conversation.

Do you have additional info on or photos of Michelle Money you would like to share? Drop us a line at starcasmtips (at) yahoo.com!

Check out all the other women competing for the heart and hand of Brad Womack in The Bachelor 2011! (Just click on the thumbnails and hop from woman to woman just like Brad gets to do!)

Click here to watch the entire Bachelorette Season 6 with Ali Fedotowsky on demand!

PHOTO Bachelor spoilers 2015: Who is Chris Soules engaged to?

The Bachelor 2011 contestant Marissa May photos and brief bio