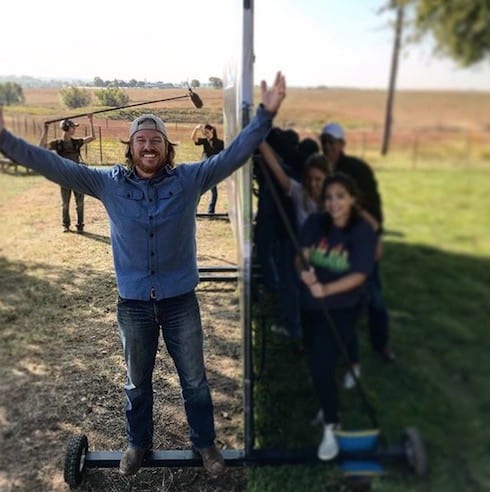 After five years, five seasons, and more fans than they ever thought they’d find, the Gainses are officially done with Fixer Upper. HGTV’s biggest stars recently wrapped production on the show’s final episode after filming the final reveal, and, while many of those fans appear to be in disbelief from watching Chip and Joanna say goodbye, it seems as though the final days on set were some of the happiest in the show’s history.

It’s hard to believe that just six weeks ago the Gainses announced they were voluntarily pulling the plug on their own pop culture phenomenon. Their official retirement announcement–which you can read in full here–was met with some serious incredulity. In the announcement’s wake, reports of “security concerns” involving the Gainses’ four children came to light, as did the possibility–still very much in the works–that they’re actually renegotiating their contracts, and will make a triumphant return to TV in 2019. (Discovery, which recently purchased HGTV’s parent company Scripps Networks, is rumored to be interested in bringing the Gainses back; click here to read that report.)

So, when Chip and Joanna say goodbye to Fixer Upper, they’re also bidding arrivederci to millions of dollars in potential income. But the truth of the matter seems to be exactly what they said in their announcement: they’re just tuckered out.

There was nothing but love in Joanna’s final reveal post:

Today was the final reveal… We definitely felt the emotion behind each of those steps leading up to the big canvas. We love you Fixer Upper ❤️ Season premiers on November 21. #savedthebestseasonforlast

Fixer Upper executive producer Michael Matsumoto, well-known for his on-set Instagram shots, did not disappoint with a tribute featuring the entire crew:

That’s a wrap. So let me raise a glass to the hardest working crew I know. I am blessed to know all of you and work shoulder to shoulder with my small army that always went above and beyond. #SmallButMighty #fixerupper #season5iscoming @hgtv @highnoonent

And longtime supervising producer Rob Zimmerman got especially personal, sharing heartfelt thanks accompanied by a photo from a night out with Joanna and Chip:

And that’s a wrap. All good things must come to an end. There are a lot of tributes going around today and I’ll add mine here. For three seasons, #FixerUpper was more than a job. Thank you @joannagaines and @chipgaines for welcoming my family into yours. You will never know how lucky the rest of us feel to have been a part of something this special. To @matsumoto818, I wouldn’t be here if it wasn’t for you. I hope that I can become half the leader that you have been. Thank you @highnoonent for the opportunity and for believing in me. We’ve been blessed to have worked with some of the most talented people in the business these last three seasons, and I’m grateful to every one of you. Thank you to our fans. I hope you all embrace our final season, which premieres later this month, and enjoy the ride. #season5iscoming Finally, thank you to Instagram for having an “edit” feature which allows me to add this: Three months before our wedding, my future wife gave me her blessing to leave LA to take what was supposed to be a six-month job in Waco. Who does that? A year later, pregnant with our first child, she finally joined me in Texas. I literally have the greatest partner in the world. Don’t @ me.

But all of this begs the question: After you wrap production on a huge TV hit, what do you do *next*? Why, you jet away for an Italian vacation, of course:

We both slept for 15 hours and missed breakfast, lunch, and an afternoon of shopping with friends, but that rest felt good! Florence, you're beautiful ❤️

Remember, though: Fixer Upper Season 5 premieres in exactly one week! Get yourself ready by checking out our in-depth preview here.

Does every Fixer Upper couple still live in Waco? Life after the reveal, explained

When is Fixer Upper’s final episode going to air?