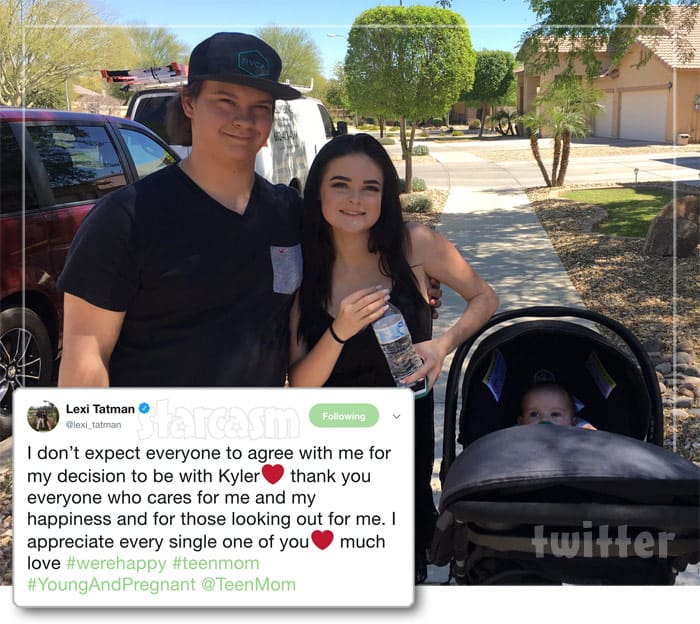 On Monday night’s episode of Teen Mom: Young and Pregnant, viewers saw dad Kyler Lopez FINALLY agree to make his on-again, off-again relationship with Lexi Tatman official again. Although the moment was a joyous relief for Lexi, numerous fans reacted negatively due to how Kyler has acted on the show all season. Lexi took notice and was quick to defend him on social media after the episode aired.

“I don’t expect everyone to agree with me for my decision to be with Kyler,” Lexi tweeted, along with a ❤️ emoji and a photo (aboce) of herself, Kyler, and their son Tobias. “Thank you everyone who cares for me and my happiness and for those looking out for me,” she added. “I appreciate every single one of you❤️ much love.” Lexi ended her tweet with a series of hashtags, including #werehappy.

I should point out that the photo is not new and dates back at least a month, so we don’t really know if #Kylexi is still a couple today or not. Reality stars kind of have to exist a few months in the past depending on the most recent episode. That being said, Lexi’s tone would certainly seem to indicate that the two are still together — or at least they have not had any sort of catastrophic and irreparable split.

Lexi is the first to admit that Kyler has not come across well on screen, but she has been defending him all season — including a series of tweets last week. “You might not see it like we see it but just know you deserve better…” someone tweeted at Lexi. She responded at length:

He loves me. Don’t let the just kidding fool you…And you don’t see what I see. I know you all are just looking out for me and it’s so sweet and I appreciate it. But I see it differently than you all and I have to remember that. I ask that everyone remember my life continues without the cameras ??

The conversation continued in a refreshingly civil manner:

TWEETER: Your young and beautiful and have a huge heart and you know him better than we do I totally agree I just hope you don’t regret it 5years from now because you can get time back and I really do root for him to get it together because you truly deserve it

LEXI: I understand that? thank you for caring for me

TWEETER: At the end we all agree and disagree and the only one who’s gonna deal and live with it is you 🙂 you for an amazing support and come so far you goo girl and love how you defend what’s yours too 🙂 keep being an amazing mommy that you are ? p.s your so humble to reply back thx?

LEXI: ??I’m trying to be. I’ve noticed I’m very defensive when it comes to Kyler but I haven’t been seeing the way the world sees him. I see him as the Kyler I know off camera. The Kyler no one else knows. I have to remember you all see the douchy camera Kyler lol

I just have to say that I truly appreciate all the concerns for me about Kyler. I apologize if I’m defensive about him. As you can all see I really love him and see a different Kyler than what you see. I have to remember you all see TV Kyler and I can’t justify his TV personality

Although Lexi is almost too apologetic for her defense of Kyler’s personality, she makes no apologies for going after those fans who attack Kyler based on his physical appearance.

She fought back against those comments in a series of tweets earlier this month, beginning with this response: 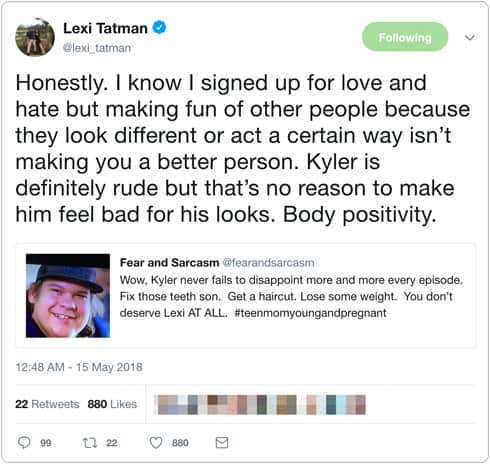 Here’s where the conversation went after that:

TWEETER: Good for you to stick up for him , people just so rude !

LEXI: They can be and I know that it’s typical to get hate. I see a ton of people saying love your body to women but not too many for men (at least what I see) I understand everyone sees a rude side of Kyler but making fun of his looks, that’s not gonna help anything.

TWEETER: You guys made a beautiful baby , but your right people shouldn’t make fun of the way he looks because he’s a rude person

TWEETER: You’re right about this. Kyler may act his age because he’s young , and he may lead you on. At the end of the day that’s your thing to seal with. But people take this stuff way to far. They don’t think of him reading this stuff or how he feels.

LEXI: Why must looks be everything?? I get he acts rude on tv but in real life he’s not

TWEETER: He didn’t sign up for this and neither did you. Love or Hate comments about drama and personal opinion about his attitude is fine. Attacking him on that level isn’t.

LEXI: Exactly! We knew what came along with a reality show. We understand that we’re boring or annoying but attacking people on how they physically look is uncalled for.

TWEETER: you got to be kidding me he jokes about playing you like poker and stringing you along. Go get counseling and some self worth

LEXI: I have plenary of self worth. I’m not saying his actions are okay. I’m saying telling him to fix things that he can’t is messed up. What happen to body positivity? My goodness you see a small portion of our lives. There’s no need to judge people on their looks.

I agree with most everything Lexi has to say. I see this phenomenon a lot where fans turn against a certain person on a show, and then all of a sudden it becomes OK to go after their physical appearance. Not only is this damaging to those people (which may not be that big of a concern to the haters), but it is also damaging to people who are reading this stuff who have similar features.

While I am on my Lexi soap box, let me say that she and her family have been fantastic this season. No, they don’t bring the crazy drama like some of her co-stars and their families, but they are real people who seem bright and kind and loving who are struggling with the impact of a teen pregnancy on their lives. No one in the family is particularly aggressive, so the lack of fireworks may come across as “boring” to seasoned reality TV viewers, but these people are genuinely struggling with some HUGE life issues — and they are doing it in a way that comes across as genuine and sincere.

I’m reminded a lot of Chelsea Houska and her family when watching Lexi’s story. She has so much love and support (yes — including financial support) at home, but she is a teen mom absolutely smitten with the baby’s father. (To Lexi’s credit, she seems more mature than Chelsea was at 17. And to Kyler’s credit, he still has time to avoid becoming Adam Lind.) It’s obviously a very tough situation for Lexi, but it’s also a difficult situation for her parents as they have to show her support while at the same time trying to help her make the right decisions — even if they aren’t what Lexi thinks she wants.

Throwback photo of Lexi and Kyler from early 2014: 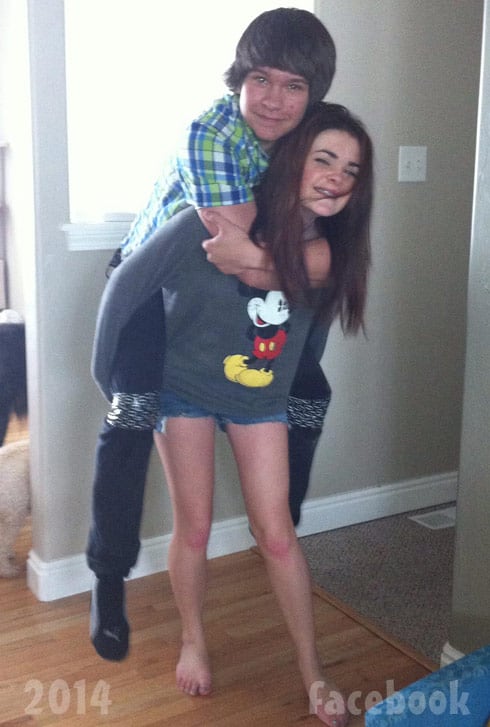 There is one great scene where Lexi is talking with her stepdad Brandon about Kyler stringing her along and she mentions that she is just “along for the ride.” Brandon doesn’t focus on bashing Kyler, but instead emphasizes to Lexi that she has value and that she doesn’t have to sacrifice her self worth for ANYONE. “You’ve had that ‘just along for the ride mentality,’ but that unfortunately doesn’t really go hand in hand with being a parent,” he says. “So, if he wants to just be Kyler, that’s his deal. But you need to continue moving forward the same. You need to — you need to stand up for yourself.”

The scene was such a healthy, mature, and more productive way to handle that conversation than what you normally see in similar interactions on reality television. A dad telling his daughter that she needs to stand up for herself in her relationships and in her life is such a damn good thing to see on TV!

I totally get that maybe Lexi isn’t a huge ratings boon for the show — not only because of her and her family’s apparent aversion to unproductive explosive and dramatic altercations, but also because Lexi is so soft spoken and mellow. Even so, she is exactly what fans claim to want whenever they start a petition to kick Jenelle Eason off Teen Mom 2 or whatever. Oh, and did I mention that Lexi not only graduated high school, but graduated early?

Perhaps part of the “ratings issue” with Lexi is that I feel very confident that she is going to be OK. Maybe it will be with Kyler in the end, maybe it won’t. But she is mature enough, and she has such a strong support system in place, that Lexi and her son Tobias are going to do great. I cannot say the same for all the moms of this show. Perhaps that the lack of surety subconsciously motivates me more to tune in to see them — because who knows what the hell is gonna happen?!

Regardless, Teen Mom Young and Pregnant is a really great show that offers a diverse array of young moms and young dads (and grandmas and granddads) struggling with teen pregnancy. If you are a fan of early Teen Mom OG and Teen Mom 2, then you really should be watching! But, if you’re going to criticize Kyler on social media, make sure it’s because he’s acting like a complete douche to Lexi and not because of how he looks! 😉