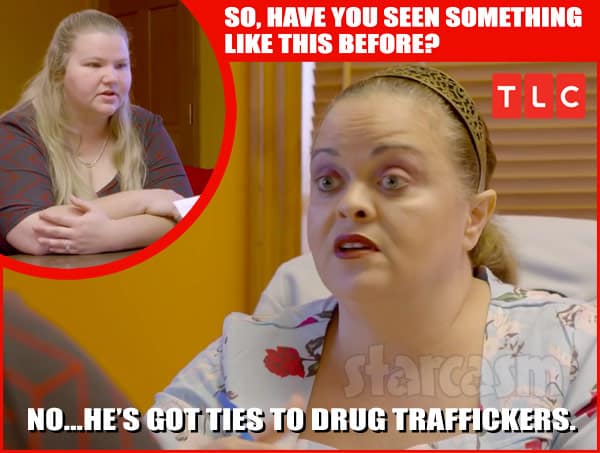 On Sunday night’s episode of 90 Day Fiance: Happily Ever After, viewers found out that Nicole Nafziger’s Moroccan fiancé Azan was denied a K-1 visa. In Nicole’s email informing her that Azan’s visa was denied, there was no specific reason listed, and in a preview clip for next week’s episode, we see Nicole speaking with an attorney.

“So, have you seen something like this before?” Nicole asks.

“No,” the attorney responds, before adding: “He’s got ties to drug traffickers.”

The preview clip set off a thunderstorm of tweets and forum posts openly questioning Azan’s potential ties to international drug trafficking organizations. Thankfully, TLC’s clickbaity teaser was easy to follow up on because the network made the first hour of next week’s 90 Day Fiance: Happily Ever After episode available to watch via the TLC go app. 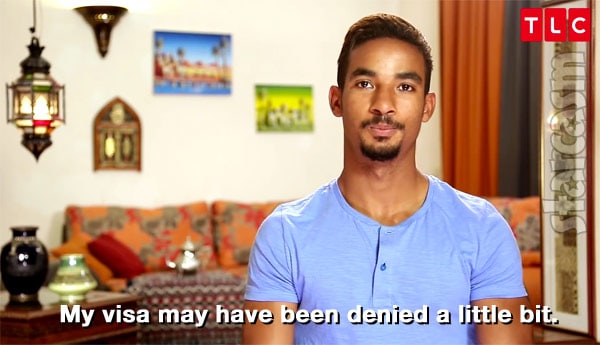 I will go a little more in depth into Azan’s visa issues below, but for those of you here for a 411 quick fix, here is the TL;DR…

The line about Azan having ties to drug traffickers was just one item in a list of potential reasons that someone’s visa would be denied under Section 221 (g), which is the Section cited as the reason for Azan’s denial when Nicole contacted the Casablanca embassy after receiving the email.

Once Nicole reveals the reason, here is what her attorney says:

OK, well that’s a very broad, um, Section. Usually it’s for people who have overstayed a visa before. It could be that there wasn’t sufficient evidence, that there was a high possibility of fraud, he’s got known ties to drug traffickers, that he committed a murder.

So, essentially, neither Nicole nor her attorney have any idea what the specific reason was for Azan’s visa denial. (Actually, her email states that the visa was “refused” not a denied.) I suppose we should all be thankful that TLC didn’t choose to creatively edit the attorney just stating: “He committed a murder.”

OK, if you were here for a quick fix, then you should probably move on now. 😉 For those in it for the long haul, let’s crack open that Evuhdense Binder, shall we?

In the full episode, Nicole’s attorney goes on to express her surprise that the email was so vague, and that it did not list a specific reason for the refusal. “I’ve never seen an email saying ‘we refused a visa’,” she says. “It’s always been like a template, and it has ‘not enough evidence,’ or ‘failed to meet standard,’ whatever. But they give you a reason.” She tells Nicole sympathetically: “You have the right to appeal, but how can you appeal if they didn’t tell you why they denied it?”

After that, the attorney suggests that Nicole consider getting a K-3 spousal visa, which essentially means that she would go to Morocco and marry Azan, then apply to bring him back to the US as her husband. (I had previously understood that Nicole was returning to Morocco to marry Azan in order to apply for a CR-1 visa, which I thought was essentially the same thing as a K-3 visa, but apparently there are substantial differences between the two.) This process tends to have a higher success rate than the K-1 visa, although the attorney points out that if Azan’s K-1 visa was denied due to some sort of security risk, criminal history, etc., then he would most likely be denied again.

Later in the episode, Nicole speaks with Azan and pitches the idea of a Moroccan wedding and K-3 visa. After an awkwardly long pause, Azan agrees. That sets the stage for Nicole to go wedding dress shopping with her mom (as featured in the preview trailer) and return to Morocco to marry Azan.

So why was Azan’s visa denied? First off, here is the full Section 221 (g) statute from the Immigration and Nationality Act

Usually, a denial based on Section 221 (g) falls into one of two categories. Either the consular officer wants additional information and/or documents from the applicant, or there have been concerns raised about the applicant and the visa is undergoing administrative processing. Azan’s case is clearly not the former, as there were no specific reasons listed or documents requested. That means that the latter is likely.

From the immigration law firm of Lee and Garasia:

If the case is put under “administrative processing,” but the consular officer is not requiring any further information from the applicant, that usually means that there is some sort of background or security check that is being or will have to be conducted before a visa is issued. Unfortunately, consular offices will usually not provide any more information other than that the case is pending. The wait can be extremely frustrating, with some cases pending for close to one year after being placed under administrative processing.

For example, the consular officer may determine that a K-1 applicant does not meet the definition of being a fiancé because he or she fails to show that there is a bona fide relationship or that a sham marriage was entered into in order to circumvent immigration laws. Like administrative processing, a case that is denied under Section 221(g) can remain dormant to the applicant’s utter frustration.

So is it possible that Nicole and Azan’s appearance on Before the 90 Days may have contributed to the visa refusal? I don’t think that is out of the question at all. Certainly, anyone watching these two on the show would have serious doubts about Azan’s commitment to the relationship. (If you are wondering why Mohamed Jbali didn’t have something similar happen to him, you have to remember that he was on 90 Day Fiance and his K-1 visa was approved long before his relationship with Danielle was aired on TLC. His green card application and renewal are an entirely different matter, although those are a little harder to deny than the initial visa.)

It is also possible that Azan intentionally blew the interview somehow. You might wonder why he would do that, but it’s important to remember that Nicole continues to send him money and Azan might just be trying to keep that revenue stream flowing. That would also explain his rather long and awkward pause when Nicole suggests returning to Morocco and getting married there.

Nicole never mentions that Azan’s visa is pending or that the application has been forwarded for administrative processing, but I took a screen grab of a section of a print out of her email from the episode and matched it up exactly to an email received from the Moroccan embassy by another applicant, who posted it online. The email does specifically mention that “the file has been returned to U.S. Citizenship and Immigration Services (USCIS) for further review.” Here is the email:

This is to let you know that your fiancé’s immigrant visa case was refused and the file has been returned to U.S. Citizenship and Immigration Services (USCIS) for further review. The decision to send the petition back for additional review was not taken lightly. The interviewing consular officer reviewed the case in its entirety before making this decision, and the consular supervisor also reviewed the file. At this point, the consulate is unable to take any further action on the case as we no longer have the file.

The email was posted in a forum for people going through the K-1 visa process, and all of the responses indicated that there was little hope of the initial visa going through at this point. It was unanimously recommended that the person go to Morocco and marry then file for a CR-1 spousal visa. (The K-3 visa was not mentioned.)

So, I guess the big questions now are: Will Nicole and Azan actually get married in Morocco? And will that be enough to get him to America? Be sure to tune in to new episodes of 90 Day Fiance: Happily Ever After airing Sunday nights at 8/7c on TLC to find out!

90 DAY FIANCE Anfisa’s Instagram has more followers than yours

90 DAY FIANCE Leida tried to kill herself with a knife, Eric stopped her, according to ‘leaked’ texts

BEFORE THE 90 DAYS Tarik and Ricky collab on music video, Tarik hints he and Hazel will be back for another season