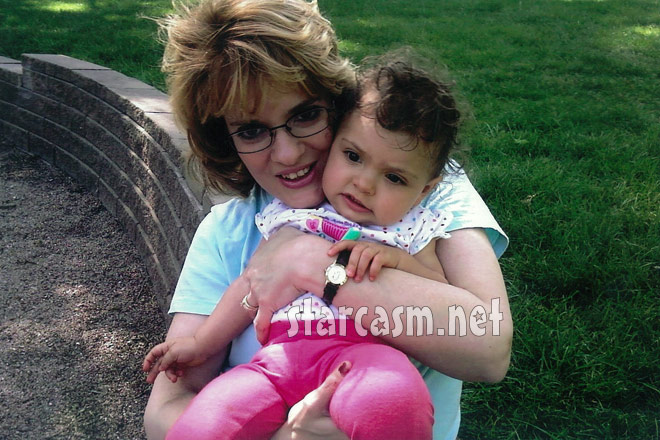 Teen Mom Farrah Abraham has been fighting to prevent her daughter Sophia’s grandmother, Stormie Clark, from receiving visitation rights to her granddaughter and so far the courts have ruled in her favor.

Until recently Clark has been silent about the conflict but after the recent court ruling against her she has begun to lash out at Farrah in the press, telling Star magazine, “I honestly don’t know how Farrah sleeps at night, knowing that she’s keeping that baby away from her grandmother, who loves her so much.”

The photo above was taken in a park in Council Bluffs, Iowa and it shows Stormie Clark, mother of Sophia’s deceased father Derek Underwood, holding baby Sophia. It is the only time Clark has ever had any contact with baby Sophia. From Star:

“It was like a blessing from God,” said Stormie, whose son Derek Underwood died two months before Sophia’s February 2009 birth. “I couldn’t help but cry. When I held Sophia, she never cried or wanted to get down. To me, it was like she knew that we were her family. She was acting like we had been in her life forever. I said to her, ‘Hi, I’m your Grandma. Grandma loves you.'”

Farrah has also been at the center of allegations of child neglect, thanks to a piece in the most recent issue of OK! The article is based on interviews with two different caregivers who looked after Sophia while Farrah was at work and shooting for MTV.

Britteny Scheer, a licensed Council Bluffs, Iowa childcare provider, looked after Sophia for nine months. She tells OK! that Farrah often left Sophia with strangers and says the first time she babysat Farrah showed her a diaper bag and “went out the door.”

Britteny goes on to make claims that Sophia isn’t developing as fast as other kids her age physically or socially. (You can read more about these allegations as well as all the other Teen Mom tabloid stories from this week in our recap post HERE.)

Farrah has answered the allegations in an interview with Radar Online. Here’s an answer to one question about how Sophia is doing:

Sophia is doing awesome – she’s healthy and really good – a cute little toddler now. She says lots of sentences, like “I love you” all the time. She loves watching Barney. She plays with the kids in the park on her “park day” all the time. The other day she was with us while we were walking my sister’s dog and she was sharing the dog with all of the kids on the playground. Sophia is very nice child; she knows her manners and she’s very friendly with other kids.