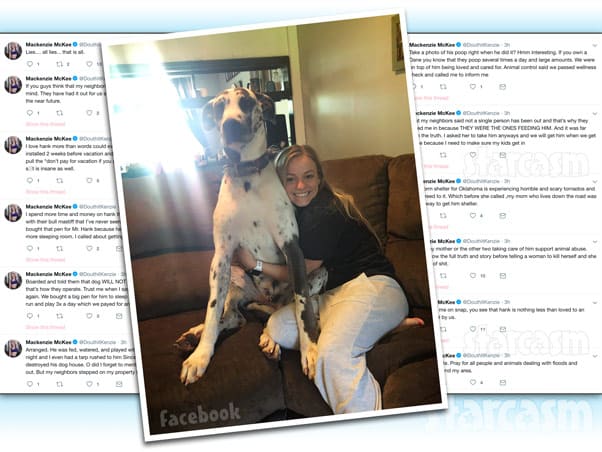 Teen Mom 3 star Mackenzie McKee has responded at length to a neighbor who claimed she was mistreating her Great Dane Hank Williams by leaving him in a small pen in their back yard while Mackenzie and Josh were on a six-day vacation to the Bahamas. The neighbor reportedly called animal control, and Hank was eventually taken. The neighbor posted photos of Hank in his tarp-covered pen, including one picture that seemed to indicate that his pen was not being cleaned.

“Lies…. all lies… that is all,” Mackenzie began her defense in a string of tweets. “If you guys think that my neighbors were telling the truth, you are out of your mind. They have had it out for us since we moved in in October and moving is in the near future,” she added.

Mackenzie then revealed that she planned to have a fence installed prior to leaving for the Bahamas, but the installation was delayed. “I paid 4K to have his fence installed 2 weeks before vacation and they stalled it out longer. So for you all to pull the ‘don’t pay for vacation if you can’t afford proper care for your dog’ bull sh*t is insane as well,” she argued.

“I love Hank more than words could ever describe,” Mackenzie stated, before then pointing out that she has done more for Hank than her neighbors have done for their dog. “I spend more time and money on Hank than my sh*tty neighbors have ever done with their bull mastiff that I’ve never seen leave his pen. Yes I said pen.”

Mackenzie continued to explain why Hank did not have a dog house, why they were not able to board him somewhere else, and how the neighbors may have stretched the truth when they reported the situation to animal control.

Mackenzie also clarified that Hank was being walked three times daily and his poop was being cleaned out. (Her previous statements about Hank’s conditions only mentioned that he was being fed and watered, and one of the photos included multiple piles of poop — another topic Mackenzie addressed at length.)

#TeenMom3 @DouthitKenzie defends leaving her Great Dane in a pen in her back yard while she & husband Josh are on vacation in the Bahamas after a neighbor called animal control: "We've had someone feeding & watching him daily." (Includes photos of the pen) https://t.co/BemUEN0mld

We bought that pen for Mr. Hank because he hates kennels and I think he needed more sleeping room. I called about getting him boarded and told them that dog WILL NOT SLEEP IN A KENNEL. But they said that’s how they operate. Trust me when I say I looked into all options.

So once again. We bought a big pen for him to sleep in. He was checked on and let out to run and play 3x a day which we payed for and arranged. He was fed, watered, and played with daily and [slept] in his pen at night and I even had a tarp rushed to him since on day 2 of vacation he destroyed his dog house.

O did I forget to mention his poop was being cleaned out. But my neighbors stepped on my property to take a photo of his poop right when he did it? Hmm interesting. If you own a Dane you know that they poop several times a day and large amounts. We were on top of him being loved and cared for. Animal control said we passed wellness check and called me to inform me that my neighbors said not a single person has been out and that’s why they called me in because THEY WERE THE ONES FEEDING HIM. And it was far from the truth.

I asked her to take him anyways and we will get him when we get home because I need to make sure my kids get in a storm shelter for Oklahoma is experiencing horrible and scary tornados and she agreed to it. Which before she called, my mom who lives down the road was on her way to get him shelter.

Me nor my mother or the other two taking care of him support animal abuse. Please know the full truth and story before telling a woman to kill herself and she is a piece of sh*t.

If you follow me on snap, you see that hank is nothing less than loved to an extreme level by us.

On another note. Pray for all people and animals dealing with floods and tornadoes around my area. 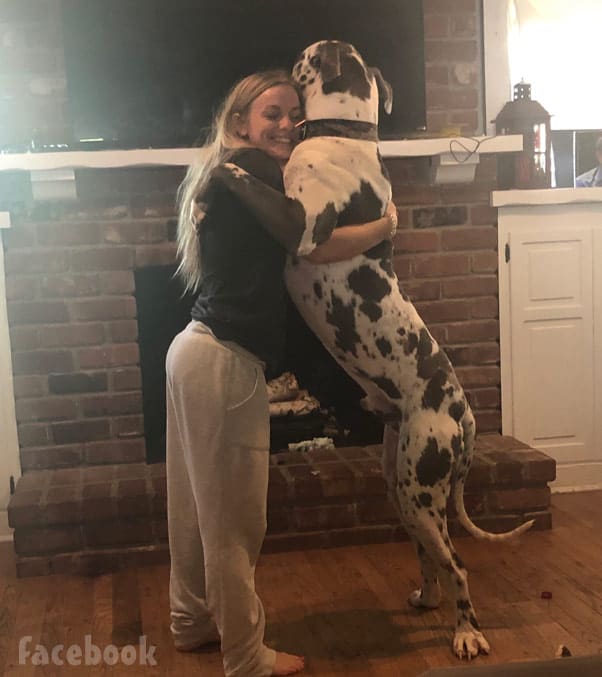 Mackenzie then interacted with other Twitter users who had questions or concerns:

TWEET: For anyone saying “pics don’t lie” uhm yes they can. They can wait to take the picture until the dog sh*ts. Pictures don’t always tell the whole truth.

MACKENZIE: Thank you. ??… pics lie and tell a small portion of a story and they can twist and turn anything to make someone look bad

TWEET: He definitely should have a dog house inside of the kennel and probably a larger kennel as well. Then he would have been fine 🙁

MACKENZIE: He’s been through several expensive dog houses. Lol. This was only a sleeping arrangement girl. I mentioned earlier on night 2 he destroyed his dog house. This is why when home, he is inside and sleeps on our bed. He is loved ?

TWEET: Definitely makes me feel better, maybe the pictures were taken at the wrong time 🙁

MACKENZIE: People put their dogs in kennels for the day and night. This one is in a pen that we bought so he DIDNT have to be in a kennel and he was being taken care of throughout the day. People are insane.

UPDATE – This is a strange update, but Jenelle Eason’s ex Nathan Griffith commented on our Instagram post in reference to this article. Nathan comes to the defense of Mackenzie and asserts that “there is nothing wrong leaving a dog in a pen for a few days.” Here is Nathan’s full comment:

You all are ridiculous! Yes, I treat my dogs like my humans and my dogs come with me or I put them in doggy vacation aka open dog kennel. But… there is nothing wrong leaving a dog in a pen for a few days. I guarantee the pound is a lot worse than that. I guarantee it had plenty of water and plenty of food. Stop hating so much or is your life really that horrible that you have to be so critical on other people’s life. At the end of the day, has it really affected your life. NOOOOO! So why add your two cents unless you’re trying to bring people down along with you because you’re that miserable. @mackenziemckee more love less hate. Help America inspire and encourage each other again in a positive way. There is a right way to approach a situation to get your point across.

Thanks for your input Nate!

I can’t help but wrap up this post with Mackenzie’s Great Dane’s namesake Hank Williams doing a song about sleeping outside in a doghouse: