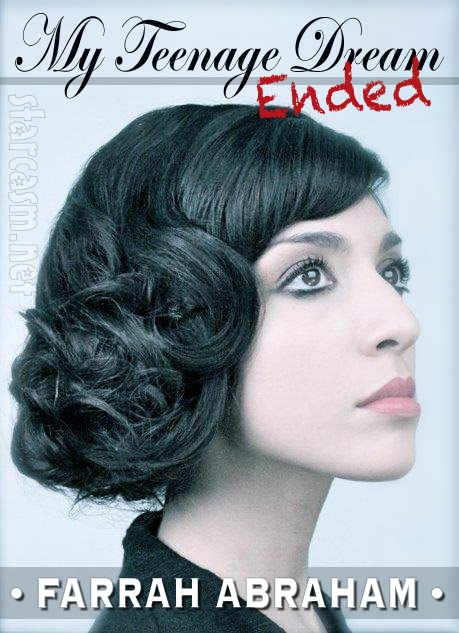 Farrah Abraham has mentioned that she is working on a book numerous times and now we have confirmation! According to the listing on amazon the 240-page hardcover book is titled My Teenage Dream Ended and has a suggested retail price of $19.95, although it is currently available for preorder for $13.57 at the time of this post.

*** I should point out that the book cover image above is not the actual book cover, just something whipped up by starcasm’s resident PhotoShopologist. (I think Farrah would like it though!)

We don’t really know much about the book, other than it is sure to detail Farrah’s struggle with being a single teen mother and dealing with the grief over the death of her daughter Sophia’s father, Derek Underwood. It appears that Farrah will be using her experience to offer up advice to others, according to this quote from her most recent article on MOMFinds.com:

While in school, I’ll also be releasing my first book, which is aimed to help young teens and parents learn from my life experiences.

The release date listed on amazon is April 3, 2012 but that seems like a long way off, especially considering Ashley Salazar from 16 and Pregnant has a book (Bittersweet Blessing) coming out this fall. On the other hand, Farrah is a busy, busy girl these days and that date is less than a year away, so who knows?

Here is a link that will not only show the current price on amazon, but will also display the actual book cover as soon as they get it:

(It’s usually better to go ahead and order it because amazon will honor the lowest price between now and whenever it does actually go on sale.)

Congrats to Farrah – it should be fun to see how she fills 240 pages! Now, where’s the It’s Gary Time! book we’re all looking forward to?

UPDATE – Farrah tweeted a few hours ago, “I can’t wait for everyone to read my book ‘My Teenage Dream Ended’ It will be the most memorable of 2012!:-) book tour dates coming soon!” So maybe April 3, 2012 is the right date after all!

TEEN MOM Mackenzie McKee opens up about how painful it is to lose her mother; feels sick over editing of funeral episode