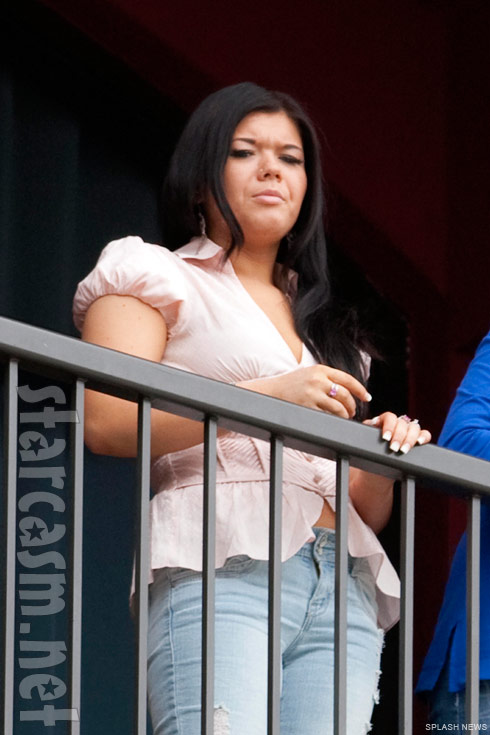 Teen Mom star Amber Portwood had her day in court today for her attack on ex Gary Shirley last year, a beatdown that was famously aired by MTV during the second season of the show. Because the couple’s daughter Leah was a minor and was present during some of the attacks, Amber faced multiple felony counts and was looking at the possibility of serving three years behind bars and a $10,000 fine.

Lucky for Amber, Madison County Court Judge David Happe took it a little easy on her by allowing her to plead guilty to two felony counts of domestic battery as part of a plea deal that saw the other charges against her dropped and her eventual two-year prison sentence suspended.

So what does that mean? Amber will have to spend two years on probation and if she violates her probation she will likely have to serve out the remainder of her sentence behind bars. As you can imagine, that situation is extra stressful when you are the star of a reality series and also constantly under the watchful eye of the media and the paparazzi. (Teen Mom 2 Jenelle Evans faces similar problems stemming from her single year of probation.)

As part of the deal the remainder of the no contact order between Amber and Gary Shirley, which prevented them from seeing each other when Leah was present except when necessary for custody exchanges, was also dropped, so I’m guessing we will start to see photos of Amber, Gary and Leah hanging out together as soon as tomorrow.

All in all it was a positive outcome for the troubled single mom. I only hope she does what it takes to get the help that she needs – much like Jenelle Evans appears to be doing. (In Amber’s trailer for Teen Mom Season 3 it appears as though her therapist will be playing a major part so perhaps she is getting some consistent counseling.)

UPDATE – Some more details of Amber’s sentencing have surfaced and there’s a little bit more involved than initially reported. In addition to being on probation for two years, Amber was ordered to submit herself to 30 days of inpatient treatment with more outpatient treatment possible depending upon an evaluation. Also, Amber is required to obtain a high school diploma – something she has very publicly been struggling with ever since she first appeared on 16 and Pregnant. And speaking of school, Amber is also required to start a college fund for her 2-year-old daughter Leah and must contribute $10,000.

Tara Reid claims she was nearly blinded during bar attack