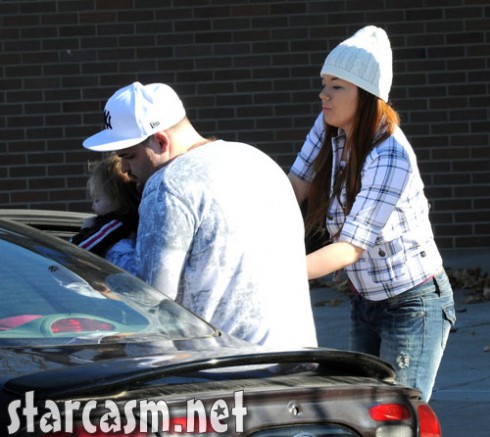 Whenever I get these stories I am reminded of how sloooooowly the court systems work in America.  It seems like ten years ago (exaggerating) when Amber Portwood got herself in trouble with the law for the on-air beat down of her baby-daddy Gary Shirley.  There’s been so much water under that bridge it would take five posts to recap, so let’s just go with where the situation was before Amber’s scheduled court date yesterday.

She has a no-contact order in effect that forbids her from seeing Gary when their daughter Leah is present.  If you’re not familiar, the big problem the law had with the televised thumping was the sad fact that it took place in front of Portwood’s daughter.  Yesterday’s appearance at a Madison County Courtroom was to determine if the whole thing would continue on to trial.

It’s important to note that Shirley is squarely in Amber’s corner and was even on hand to show his support.   However, even the power of his Belden Lineman shirt was unable to keep a visibly upset Amber from getting the gavel from the judge which means in short that Amber P. is headed to trial.  Sources from E on the scene stated that the Teen Mom was very emotional, upset and crying and that she “stormed out” after the verdict was read.

NYDN reports that she rejected a plea deal that included 90 days of house arrest, and 2 years probation, but could have kept her out of jail, because she says it got in the way of her being a mother. Going to jail, on the other hand, wouldn’t put a damper on your motherly routine?

In legal terms here is what she is up against as a result of the Gary hari-kiri:

-> One felony count of neglect of a dependent and

-> One misdemeanor charge of domestic battery

Leah has been under the care of Gary for some time now.  A source also stated that Amber has been trying to stay out of the spotlight in hopes that it would help with her case but her recent vandalism scandal with allegations of a Portwood full moon and neighbor baby-daddy theft has hurt that approach.  The trial is set for November 16.  What so soon?