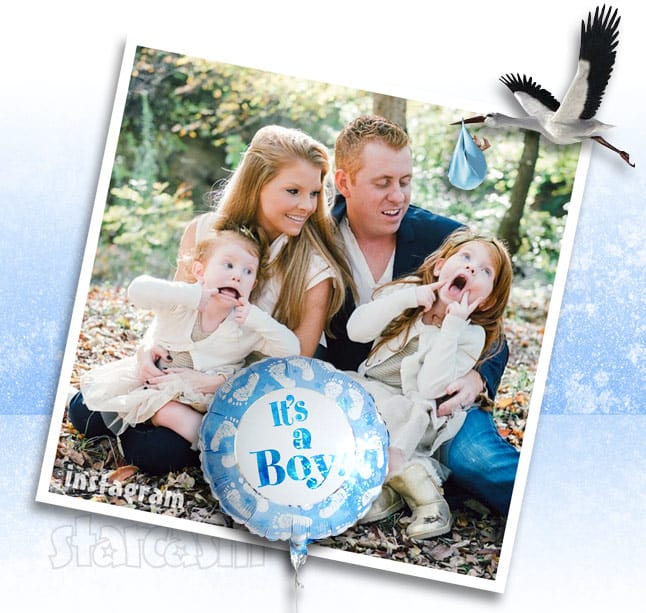 The Real Housewives of Dallas star Brandi Redmond accidentally let it slip that she was the mother of three earlier this month, seemingly confirming reports that she and husband Bryan had adopted a baby boy. Now, the 39-year-old reality star is finally going public about the adoption, sharing photos and details about their new son, Bruin Charles!

“He’s so, so happy,” Brandi tells People. “From the moment that I met him for the first time, he just looked straight into my eyes, held my finger as tight as he could, and let out this giant grin. And it’s been like that ever since. He smiles all the time and just giggles and laughs.”

Bruin was born born prematurely on December 31, and weighed just 4 lbs., 5 oz. His parents were both teenagers, and the elected to award the infant to the state at birth. Perhaps due in part to his early arrival, there was no plan for placing the baby and social workers scrambled to find him a home.

In October, Brandi and Bryan consciously decided to halt their attempts to expand their family, which includes daughters Brooklyn, 9, and Brinkley, 6. “My fertility was on the decline,” Brandi says, which fans of RHOD are well aware given that Brandi’s fertility struggles have been featured on the show. “Bryan and I said, ‘You know what, we’re not going to even try anymore.’ I turn 40 in July, and there are so many risks. We just said, ‘Our family is fine with the four of us.’ Adoption wasn’t even on our minds, even though one of my own brothers is adopted. We just walked away from it all.”

It was just after the new year began that Brandi received a phone call from a friend that was connected to a social worker aware of the newborn looking for a home.

“It happened pretty much overnight,” Brandi recalls. “He was in the neonatal intensive care unit because he was born prematurely, so we flew out of Dallas — he was still in Texas — and we met him in the hospital. We just immediately fell in love.” Brandi says the initial bond was so strong that when she had to leave the hospital to fly back home, she “cried for six hours.”

Perhaps making the bond even more natural was the fact that little Bruin shares the Redmond family’s trademark red hair and fair complexion. “It’s crazy,” Brandi says. “He’ll always look like he came from me, which he did — he came from my heart.”

Here are two photos of Bryan and Brandi’s son Bruin from People and photographer Stephanie Rose:

#BrandiRedmond's fertility struggles were well documented on season 2 of Real Housewives of Dallas. But when season 3 premieres this summer, she and husband Bryan will have a surprise for fans: infant son #BruinCharles, whom the couple welcomed through adoption this past winter. Tap the link in the bio to read all about their journey. | ?: @stephanierosephoto

Bruin joins a family that share the letter “B” at the beginning of their first names — but where did his rather unique name come from? “When I was pregnant with Brinkley, the doctor’s said that she was a boy and my husband always loved the name Bruin,” Brandi says. “My husband’s into sports and I think he’s a UCLA fan [despite the fact that] he didn’t go there. And he just loved that name. So Brinkley was ‘Bruin’ for a little bit until they said, ‘Oh no, it’s a girl.’” But Bryan’s fondness for the moniker remained.

Brandi says that Charles is a “family name,” but didn’t share any additional details.

Brandi confirms that the entire adoption process was captured by Bravo cameras for the upcoming season of The Real Housewives of Dallas. “They followed the whole thing from start to finish,” Brandi says. “It’s a beautiful story. It’s crazy because they captured the roller coaster of emotions we go through.”

CONGRATULATIONS to Brandi and Bryan! And congratulations to little Bruin on joining such a loving family! We look forward to meeting him and witnessing the emotional adoption process first hand this summer!

UPDATE – Brandi has revealed that there might have been more inspiration for the name Bruin than what she told People! In response to someone on Twitter who expressed her disdain for the name, Brandi tweeted:

And if u had been in church with my family about #bears that spoke to our hearts. Wouldn’t change his name for the world. God spoke thru @petebriscoe ??

Is Drew Barrymore having a girl or boy? She says…