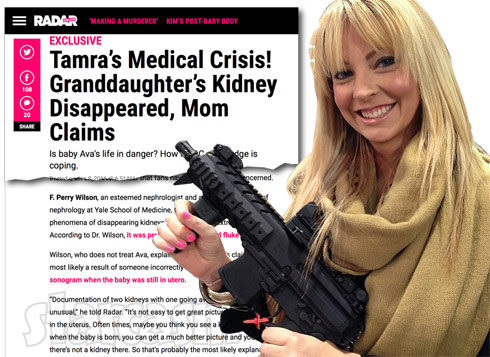 Tamra Judge’s daughter-in-law Sarah Rodriguez recently revealed on Instagram that her daughter, Ava Ryan, was born with one kidney. “She had two [kidneys] in utero and by the time she was born [one] had gone away,” Sarah wrote.

Radar Online took it upon themselves to consult a doctor from Yale, who has never met Sarah or Ava, to explain what actually happened. From “esteemed nephrologist” Dr. F. Perry Wilson:

Documentation of two kidneys with one going away is super super super unusual. It’s not easy to get great pictures when the kid is in the uterus. Often times, maybe you think you see a kidney and then when the baby is born, you can get a much better picture and you see that there’s not a kidney there. So that’s probably the most likely explanation. Kidneys don’t really disappear without a trace, except in extraordinarily rare circumstances.

Clearly angered by this long-distance diagnosis, Sarah spoke with Real Mr. Housewife to offer up her reaction to Dr. F. Perry Wilson’s insights and explain exactly what happened. “This doctor clearly has no idea what he’s talking about,” Sarah stated.

Sarah explains that during her 20-week ultrasound it was discovered that Ava had a mass on her left kidney. Sarah says she was referred to a perinatal specialist so they could monitor Ava while in utero. “Every four weeks I would go in and have her kidneys checked out while I was pregnant,” Sarah explained. “As her kidney grew, the mass got smaller. They knew that it was not a tumor from these visits.”

Then, when they did the measurements, they realized they said the first diagnosis was a pelvic kidney– when you’re in utereo when you’re a baby they all develop in the pelvis and then, once the baby grows, they move up into the place where they’re supposed to be. Sometimes a kidney will get stuck in the pelvic area because that’s where it originally formed. They said sometimes it’s functional, sometimes it’s not functional, but we had to wait.

Sarah says the kidney later appeared to be in the right place, but was “extremely long.” The mass had disappeared by this time, but doctors could not tell whether the kidney was functioning.

A month later it was determined that Ava’s kidney was indeed functioning properly and that further monitoring was not necessary. 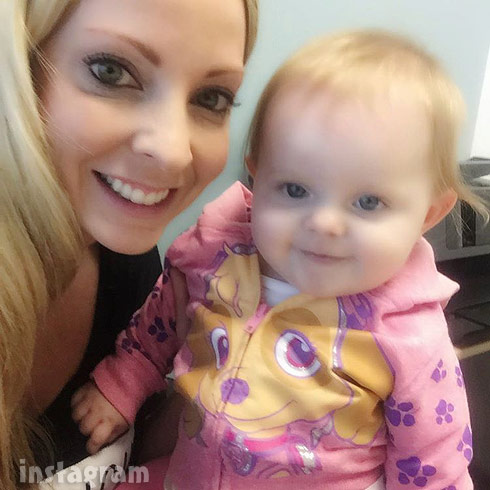 After Ava was born, an ultrasound revealed that Ava’s left kidney was untraceable. It was assumed that the kidney was completely missing, and Sarah took Ava to see Dr. Nguyen at Choc Children’s Hospital in Orange County:

We saw him and he looked through her records and her current ultrasound and diagnosed her with multi cystic displasitc kidney. That definition is it has no function and usually involutes or shrinks away with time. What that means is she didn’t have a functioning kidney and it kind of disintegrated into tissue. A lot of the times it’s not detectable on ultrasounds because it’s dead tissues. In the easiest terms, it means it disappeared.

But, with biology being the miraculous wonder that it is, Ava’s right kidney compensated for the lack of a left kidney…by growing. “Her right kidney is doing the job of both which is amazing,” Sarah says. She adds that Ava is scheduled for ultrasounds every six months moving forward to monitor her remaining kidney and “make sure whatever caused the left kidney to disintegrate doesn’t happen to the right kidney.”

Sarah concludes her reaction to Dr. Radar by pointing out: “I do work for multiple nephrology doctors at Renesan Software that I have at my fingertips [and they] have said this is common, unlike what the misinformed Dr. quoted in that article claimed.”

Grandma Tamra (aka Tam-ma) took to Facebook to express her anger at Radar Online (with whom she has had many disputes before) for their post about the disappearing grandkidney and the use of the term “medical crisis:”

My granddaughter is not having a health crisis as reported. Yes she has only one functioning kidney, she is healthy and happy despite what was reported today. How dare that Doctor give his opinion without knowing her ( what kind of doctor does that? Oh the kind that won’t return calls) shame on them for writing about an innocent baby. Thank you Real Mr. Housewife for going to the source to find out the truth. ‪#‎reputable‬

Have Orange County Housewives Gretchen and Tamra settled their feud?