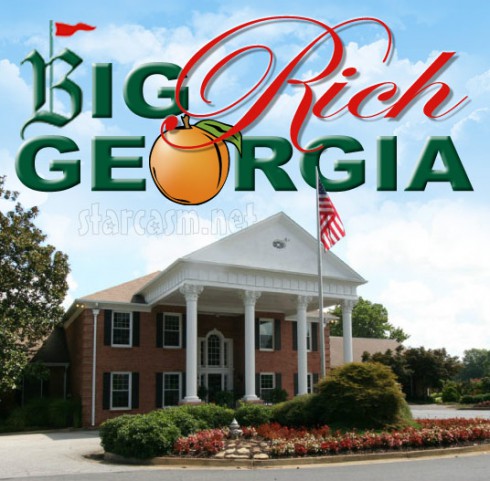 On Wednesday the Style Network revealed in a statement that it would be renewing its reality series Big Rich Texas for a third season and also announced that they will also be airing another installment of the franchise based in Atlanta called Big Rich Atlanta! From the official press release:

Returning for a third season, “Big Rich Texas” will pick up where the drama left off with several new mother/daughter teams to stir the pot and attempt to take over as the new queens of Dallas society. “Big Rich Texas” will return on Sunday, October 7 at 8pm ET/PT on Style. The latest installment of the franchise, “Big Rich Georgia” enters the exclusive world of Buckhead Country Club, where outrageously wealthy mothers and daughters do whatever it takes to stay on top of the social scene and in control of the action. It’s hot, it’s humid, and it’s full of drama. “Big Rich Georgia” will premiere in first quarter 2013.

The announcement sparked a good deal of debate online among Atlanta locals, who all seemed to be curious about this “Buckhead Country Club” because it apparently doesn’t exist. Rodney Ho addressed the issue in his “Radio & TV Talk” blog for the Atlanta Journal & Constitution on Friday:

The big stickler for me: what the heck is Buckhead Country Club? There is no such thing. The publicist did not know but will check later today to get me the actual name of the country club in question. The only real country club in the confines of Buckhead is Cherokee Town & Country Club and the woman who answered the phone there confirmed it’s definitely not them.

I did a little research and discovered that the Buckhead Country Club is actually Brookfield Country Club, located in Roswell, Georgia. (That is a photo of the clubhouse in the graphic at the top of this post.) Here is an excerpt from their July, 2012 newsletter in which the country club’s General Manager, Bill Houck, announces the show will be taping at the club: 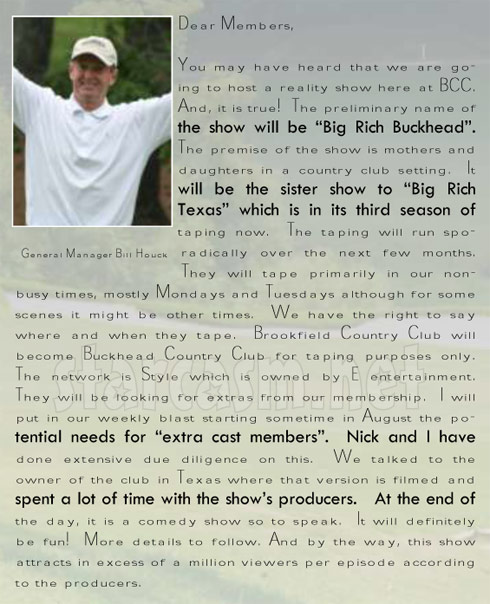 And in case you have a hard time reading it (the font is a little funky), here it is again:

Dear Members,
You may have heard that we are go- ing to host a reality show here at BCC. And, it is true! The preliminary name of the show will be “Big Rich Buckhead”. The premise of the show is mothers and daughters in a country club setting. It will be the sister show to “Big Rich Texas” which is in its third season of taping now. The taping will run sporadically over the next few months. They will tape primarily in our non- busy times, mostly Mondays and Tuesdays although for some scenes it might be other times. We have the right to say where and when they tape. Brookfield Country Club will become Buckhead Country Club for taping purposes only. The network is Style which is owned by E entertainment. They will be looking for extras from our membership. I will put in our weekly blast starting sometime in August the po- tential needs for “extra cast members”. Nick and I have done extensive due diligence on this. We talked to the owner of the club in Texas where that version is filmed and spent a lot of time with the show’s producers. At the end of the day, it is a comedy show so to speak. It will definitely be fun! More details to follow. And by the way, this show attracts in excess of a million viewers per episode according to the producers.

So “Brookfield Country Club will become Buckhead Country Club for taping purposes only.” And I love how he tries to downplay any negative attention the show might bring to the club by saying “it is a comedy show so to speak.” 🙂

For those of you wondering where the Brookfield Country Club is located, here it is (marked with the “A” pin) on Google maps – approximately 16 miles north of the I-285 loop and thus about 18 miles north of North Buckhead: 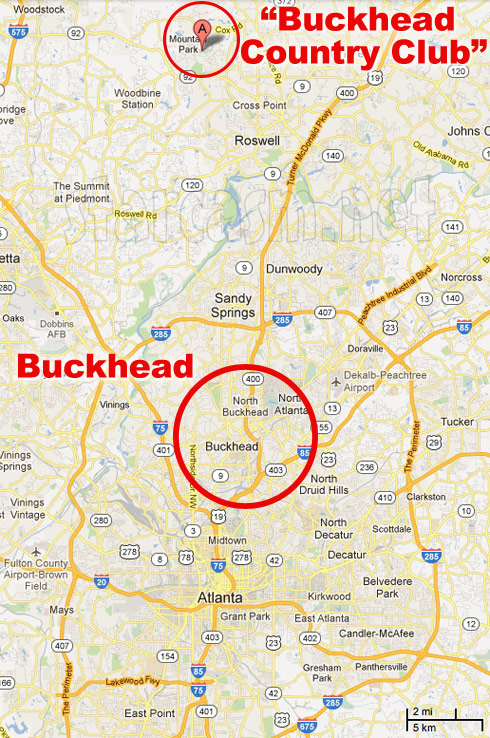 I’m sure the residents of Buckhead are going to be fuming about this one! May I suggest to them now to call this whole fiasco “The Roswell Incident?”

I checked out the Brookfield Country Club website and here are the different membership rates as of July, 2012: 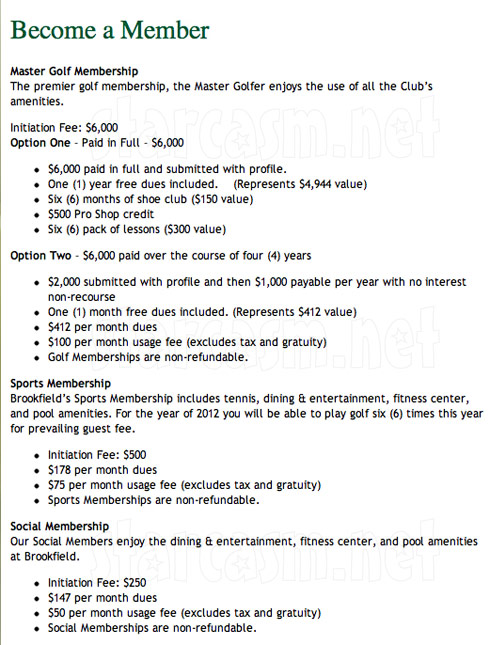 So far there is still no word on who the cast members are. If you know anything, please comment below or drop us a line at starcasmtips (at) yahoo.com!