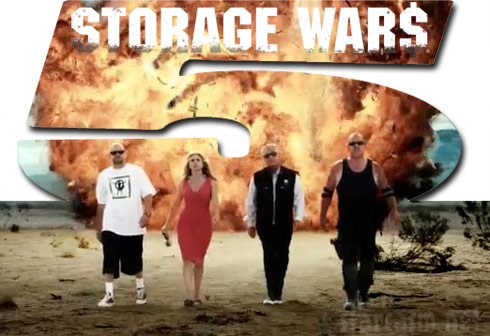 A&E officially announced today that the original band of storage locker warriors will be back for another round as Storage Wars Season 5 premieres March 18 with two brand new back-to-back episodes starting at 9/8c. Although fans will be seeing bidding mainstays Brandi Passante, Jarrod Schulz, Casey and Rene Nezhodah, Darrell Sheets and Ivy Calvin doing battle, they won’t be treated to more antics from charismatic jokester Barry Weiss — not until 10/9c that is!

Yupppp! Barry Weiss hand landed his own show! Titled Barry’d Treasure (I’m guessing Barry helped with that one), the show will follow Barry (now retired from the storage auction game) as he embarks on a “cross-country journey unearthing some of the nation’s rarest and most fascinating collectibles,” according to A&E’s press release. “Riding shotgun in Barry’s enviable assortment of automobiles is his motley crew of sidekicks who aid his efforts to haggle with the toughest, and sometimes oddest, collectors in America. But Mr. Weiss has an insatiable thirst for misadventure and often strays from his intended treasure route. Whether it’s co-piloting a buggy in Amish country or taking a ride on a camel in Appalachia, ultimately for Barry, nothing’s more valuable than a good time.”

Barry’d Treasure is also a half-hour show and will also premiere with back-to-back episodes March 18.

What do you bet Barry will be sporting a pirate patch over one eye in the premiere episode? Arrrrrrr you going to be watching? 😉