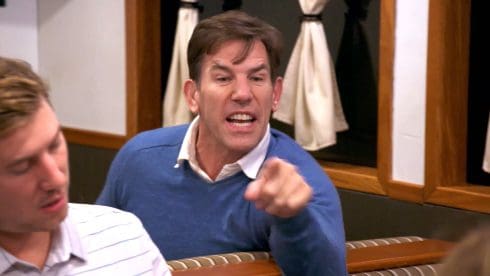 Thomas Ravenel went on a bizarre Twitter rant this weekend taking low blows at everyone from his former Southern Charm castmates to Bravo execs. Consistent with Thomas’s social media M.O., the tweets have since been deleted — but not before we were able to screengrab them.

The most controversial tweet of the night came when Thomas took aim at Craig and Kathryn and fired. “So glad Naomie found a real man who gets up early in the morning and works all day,” Thomas said. “Craig is a pu**y who kept Kathryn out all night doing drugs while I was at home with baby Kensie. Great guy.” 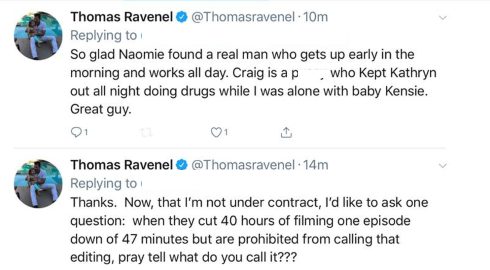 Thomas went on to explain that since he is no longer bound by his pesky contract, he’s free to question the editing of the show.

“Now, that I am not under contract, I’d like to ask one question: when they cut 40 hours of filming one episode down of 47 minutes but are prohibited from calling that editing, pray tell what do you call it???” he asked.

Another Twitter user asked Thomas about joining the cast of the Southern Charm Savannah to which he replied, “Not if Bravo (aka liars) are involved.” 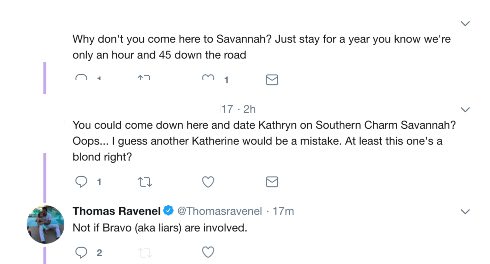 Thomas also bashed his own Charleston cast. “You have no idea how I wanted to leave Pat’s dinner parties due to sheer boredom,” he said. “I found myself leaning toward monosyllabic discourse just so Cameron and Craig could keep up.”

He also called Cameron and Craig “losers” and said they “pretend they won’t associate with me”. 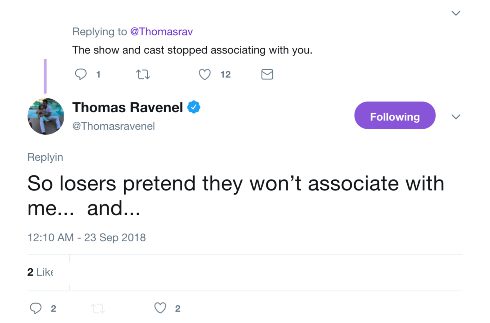 Unsurprisingly, Thomas said he won’t be returning for another season any time soon.

“Due to the petty hate sites of very boring, unaccomplished out of town cast mates on Southern Charm I will return for another season, just as soon as a donkey wins the Kentucky Derby!”

But let’s not forget, Thomas’s exit from the show wasn’t entirely his decision. He faces serious allegations of sexual abuse by his former nanny, and Bravo was starting their own investigation into the reality star’s behavior.

UPDATE: Since we published this article, Thomas has been arrested on a second degree charge of assault and battery. Click here for the full report.

Despite having the chips stacked against him, Thomas claims he’s in good standing with his peers. “In my community, I’ve already redeemed myself by not associated with the show,” he said. 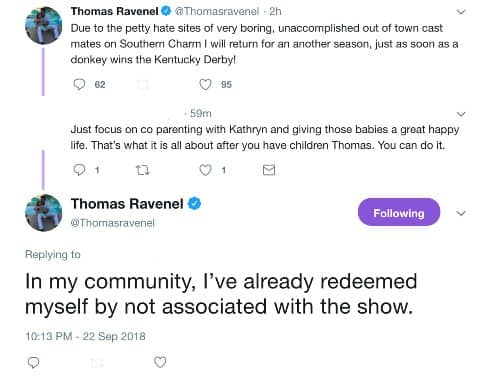 Sources tell us Thomas had a nasty run-in with some fans the night of his Twitter rant, so perhaps that’s the reason for his blatant outburst. Others argue that his girlfriend, Ashley Jacobs, is the real author behind these tweets.

As of this writing, there’s been no response from Kathryn or Craig regarding Thomas’s accusations against them. Stay tuned!

SOUTHERN CHARM Kathryn tells Thomas ‘I will always love you’