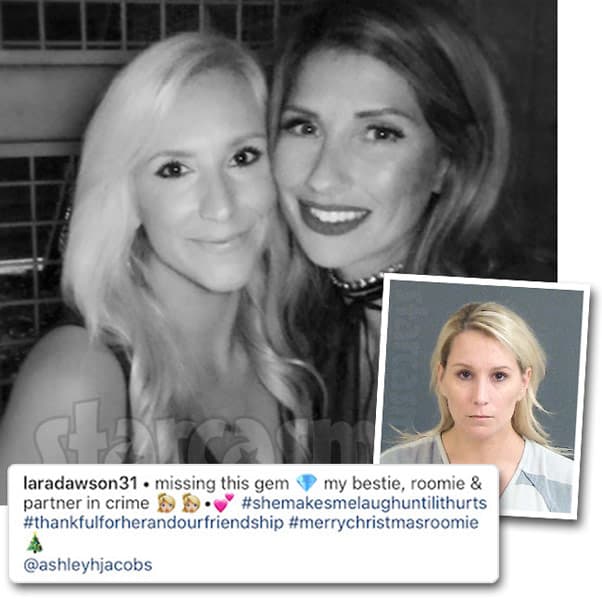 We have some unsettling news to report from one of reality television’s most inaccurately titled shows. The former roommate of Southern Charm star Ashley Jacobs, who later teamed up with Kathryn Dennis in her custody battle with Thomas Ravenel, was arrested last week in Charleston after she allegedly filed a false police report claiming that Kathryn Dennis was stalking her and hiding in her closet.

According to jail records, 33-year-old Lara Dawson was arrested on Friday by Mount Pleasant police and booked into the Sheriff Al Cannon Detention Center just after 6PM. She was charged with filing a false police report of a felony violation.

Here is her mug shot photo: 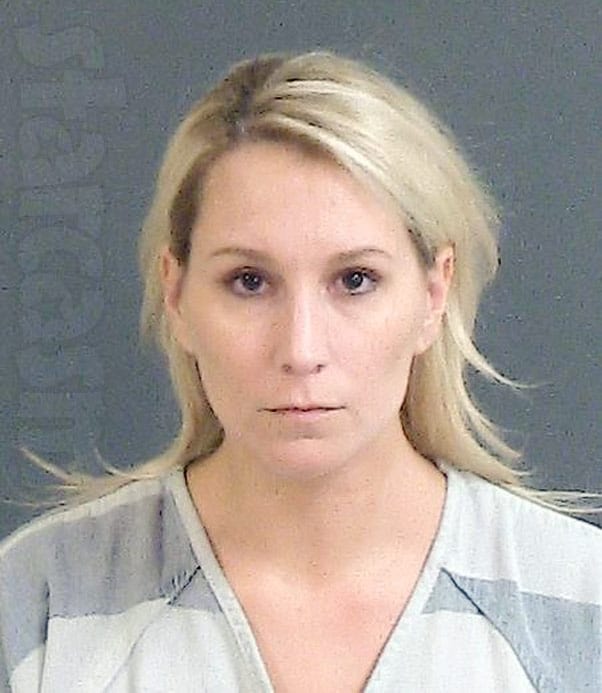 On the same day that Lara reportedly made her first phone call to police about Kathryn being in her closet, she shared this post on Facebook:

Sooooo I’ve had my phone hacked since June (see picture in comments. So if “I” have talked to you it’s only through voice messenger.. the rest was..not me.

After the second call, an officer spoke with Lara and filed a report.

Police reportedly contacted Kathryn and were able to confirm that she was not in Lara’s closet or stalking her. As a result, Lara was arrested for filing the false report.

In a bit of a concerning update, Tamra Tattles’ source reveals that Lara was threatening suicide after her release and she has since been placed on a 72-hour psychiatric hold.

The incident comes during a very difficult time for Lara. In addition to suffering through all of the drama caused by being associated with Ashley, Kathryn and Thomas (more on that in a minute), Lara also recently went through a divorce. She and her husband of nearly five year, Brandon, officially divorced on July 10. The couple share a five-year-old daughter named Riley.

Lara posted about her divorce on Facebook on the day it was finalized. “This is not a ‘woe is me’ rant,” Lara explained, “it is to thank everyone that has been praying for me, for Riley, for my family (parents, etc. Bc this affects everyone) for so so long (4.5/5 years) during a very tough place. I’m no saint and own my stuff and I will continue to be open?honest and will strive to be more like Christ each and everyday.”

In the comments section, Lara referenced her experience with the Southern Charm cast specifically:

COMMENT: You are stronger than you know, and truly always have been. Through all the bumps, barricades and potholes, you have persevered. You do have an army of prayer behind you and ahead of you. You also have a ton who love you and are here for you. ❤️ ?? ? ??

LARA: Thank you so much and I’m so sorry when I wasn’t on my usual path…the “southern charm” days (the entire cast and crew) are over and died with my divorce. Now that felt good … meaning to finally see that red flag and go with your gut…..without Brandon’s power now over me I am FREEEEEEEE and I can now SEEEEEEEEEEEE????????????????❤️❤️❤️❤️❤️❤️

Speaking of Lara’s Southern Charm days, I will attempt to briefly summarize her history with Ashley Jacobs, Kathryn Dennis and Thomas Ravenal for you.

When Thomas Ravenal kicked Ashley Jacobs out of his house, she moved in with Lara. The relationship between Ashley and Lara soured, and Lara reportedly kicked Ashley out. That didn’t sit well with Ashley, and she started an online campaign against Lara.

Ashley returned to the apartment on February 4 to retrieve some of her belongings, but Lara was not at home. Lara’s father, who reportedly suffers from Alzheimer’s, was home.

From Tamara Tattles after Instagrammer @a_beautiful_snarky_mess initially broke the story (but later deleted her posts due to harassment):

So Ashley Jacobs, “the hospice nurse with the delightful bedside manner” allegedly screamed and cursed at the father. Then she went in and allegedly began to take whatever she felt like from her former home. While this was happening, the ex-roommate arrived back at the house and called the police. The police were called and a report was filed. Then, the Police served Ashley Jacobs a no trespass notice, This essentially is a permanent order restraining her from ever returning to the property. This no trespass notice was communicated to her by phone. Because, Ashley Jacobs is homeless and thus has no mailing address where the police can send the notice.

Fast forward a few months to June, and Lara filed an affidavit as part of Kathryn Dennis’ custody battle with Thomas Ravenal. The affidavit included text messages between Lara and Ashley about Thomas, as well as statements from Lara. “Whenever she [Ashley] and Thomas would break up, she’d always tell me the truth about what had been occurring over at his house,” Lara said in the filing. “She always talked about his alcoholism and the fact that she was tired of taking care of his children.”

The very same day that the affidavit was reported, Ashley Jacobs responded with some very unflattering comments about Lara. “Laura is a pill popper and she did this out of pure revenge,” Ashley told The Blast. “Laura is simply mad at me because I moved out of her house due to the fact that I caught her stealing from me and that she is a pathological liar.” She then added that it “makes sense her and Kathryn would team up they are both mentally ill. She is one of the main reasons I left South Carolina.”

Court records indicate that Lara has a court hearing scheduled for November 22.