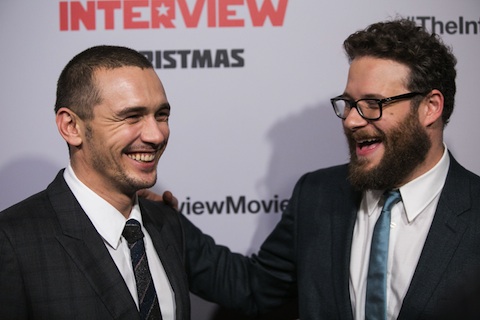 Those Sony executives sure do call ’em like they see ’em. In what’s just the latest in a long series of embarrassing revelations since the Sony Hack Attack of 2014 (#SonyHackAttack2k14), it’s come to light that not only did the top brass find Franco’s bore-fest The Interview “desperately unfunny,” their biggest problem with the movie was the fact that it featured Franco in the first place.

Franco, or “Jimmy Franks and Beans”  (as he is increasingly known) gets the harshest criticism in a round of e-mails from international producers and marketers, almost all of whom say that The Interview won’t work in their markets. And for a variety of reasons: It’s offensive; it’s tasteless; the comedy doesn’t translate.

But the root cause of most of these issues, in one way or another, comes back to J-Fran. Here’s a sample:

James Franco proves once again that irritation is his strong suit which is a shame because the character could have been appealing and funny out of his hands.

The same exec went on to say that he would prefer no member of the cast and crew hit the publicity circuit to promote, but, if they absolutely have to do that, the best case scenario would be “the lot—not just [Seth] Rogen and [director Evan] Goldberg but God help us Franco as well.”

The whole round robin is actually a fascinating look at how a studio tries to position itself when it knows it has a turd on its hands. Assorted folks the world over call the movie a “misfire,” say it’s “unfunny and repetitive,” are shocked that it contains “a level of realistic violence that would be shocking in a horror movie,” and is overall an “unbalanced execution.”

Plus, it’s a buddy comedy about two inept spies sent to assassinate the leader of a foreign country. Which is something Sony went to great lengths to keep secret in its domestic promotional campaign. So it looks like one of the benefits of the ongoing Sony Hack Attack fallout is the studio essentially pulling the movie from distribution in the wake of terror threats.