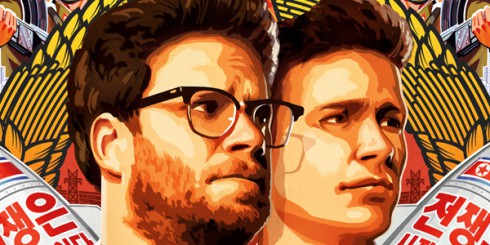 As confidential Sony information continues to leak, the hackers warned they are planning 9/11-style attacks on theaters that show Seth Rogen and James Franco’s The Interview.

We will clearly show it to you at the very time and places “The Interview” be shown, including the premiere, how bitter fate those who seek fun in terror should be doomed to.
Soon all the world will see what an awful movie Sony Pictures Entertainment has made.
The world will be full of fear.
Remember the 11th of September 2001.
We recommend you to keep yourself distant from the places at that time.
(If your house is nearby, you’d better leave.)
Whatever comes in the coming days is called by the greed of Sony Pictures Entertainment.
All the world will denounce the SONY.

Even though the hackers have demanded Sony halts the release of The Interview, it is still scheduled to premiere nationwide on Christmas. Speaking on Good Morning America this week, Seth said the movie is supposed to be “very silly” and not “controversial in any way.”

“At this point, it’s too late to have any [second thoughts], really,” he said. “Again, I like the movie. I can’t, in my head, over-connect everything surrounding it with the movie itself.”

North Korean officials deny involvement with the Sony hack. The FBI continues their investigation to determine who is responsible.

Before and After: How drastic was Seth Rogen’s weight loss?

The Interview made $1 million over Christmas