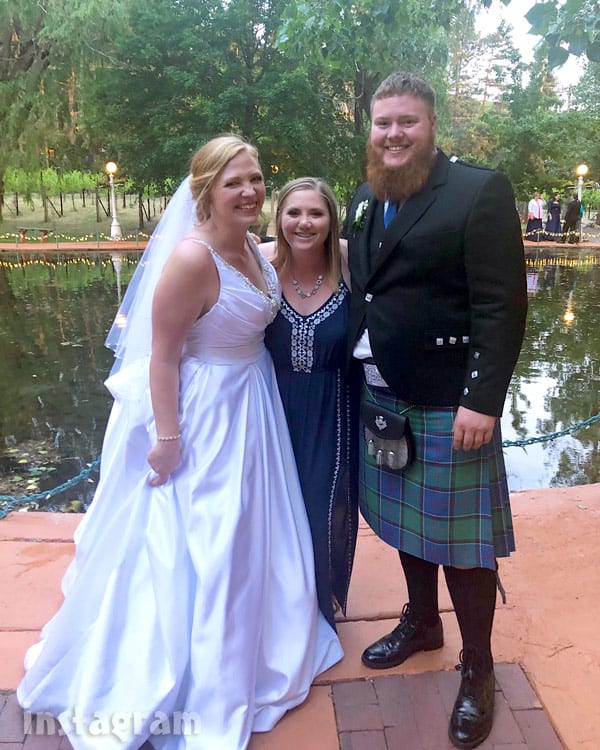 23-year-old Aspyn and her kilted beau Mitch tied the knot in front of 120 guests at the picaresque La Caille restaurant. The festivities ramped up for the reception, which was attended by a whopping 400 Aspyn- and Mitch-lovin’ peeps!

The bride Aspyn was more radiant than usual in her beaded and satin Alfred Angelo wedding dress a she toted a bouquet of white flowers: 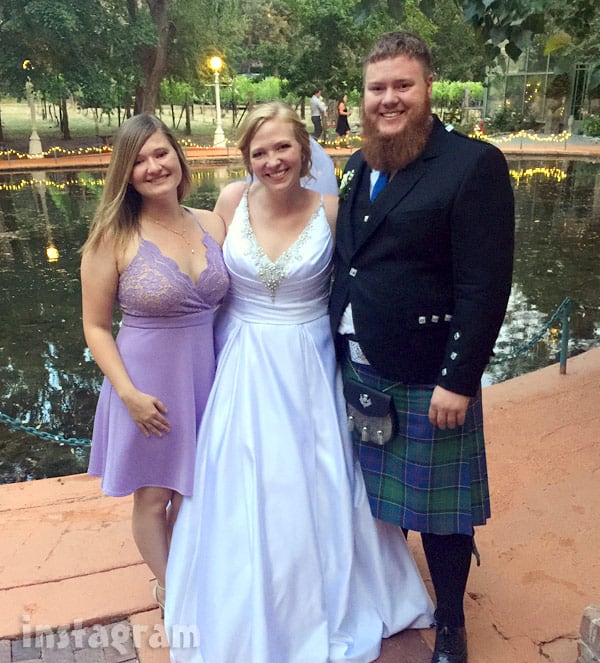 All four of Aspyn’s moms wore hats handmade by Mitch’s mom. Unfortunately, I was not able to find a good photo of the hat-tastic sister wives brigade, so you will have to head over to People or TLC to see those photos as well as numerous others taken by wedding photographer Kali Poulsen.

We do have a great photo of Aspyn’s dad Kody, though, who joined his son-in-law-to-be Mitch by getting man skirted up for the joyful occasion: 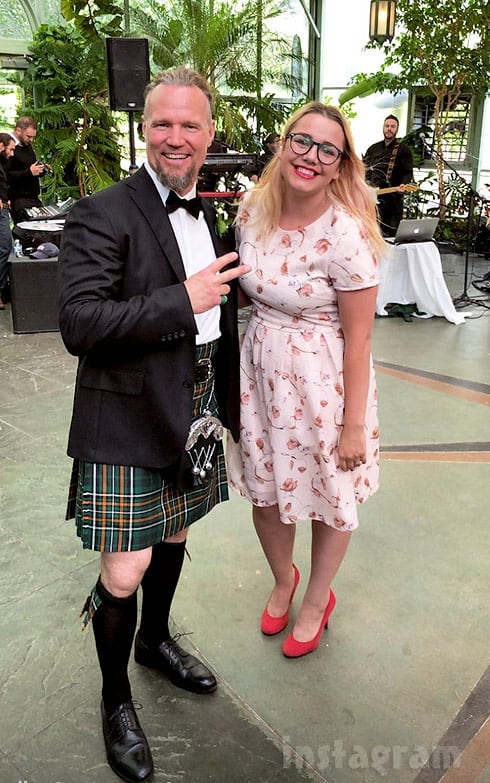 More details on the actual ceremony from People:

For their vows, the bride and groom wrote their own messages and did not exchange rings since they’ve already been wearing them for some time. They also chose to have a handfasting ceremony, a Celtic tradition in which couples bind their hands together during the wedding to symbolize their connection and devotion to one another.

In case you missed it, the couple announced their engagement back in January. “We got dressed up and took a walk to the waterfront before dinner, where he got down on one knee and asked me to marry him,” Aspyn said of the question popping. “I was so happy, I said yes immediately and pulled him up to kiss me before he could even put on the ring.”

Aspyn and Mitch (full name David Mitchell Thompson) met while the Browns still lived in Utah, and later reconnected at a rally. “We were raised in the same church group, and I had a little crush on him,” Aspyn reveals. “We went different directions until a rally some of my family attended in Utah, where we both happened to be. My dad’s brother asked what ever happened between us, which was nothing, because neither of us did anything about it. So I decided to call him.” The rest is history. 🙂

But, back to the wedding!

Here are numerous photos posted by attendees on Instagram, including a photo of Aspyn and Mitch kissing, another of them driving away as Kody and Christine hug it out, and a picture from the elaborate reception in which I believe you can see Kody and Robyn dancing in the background: 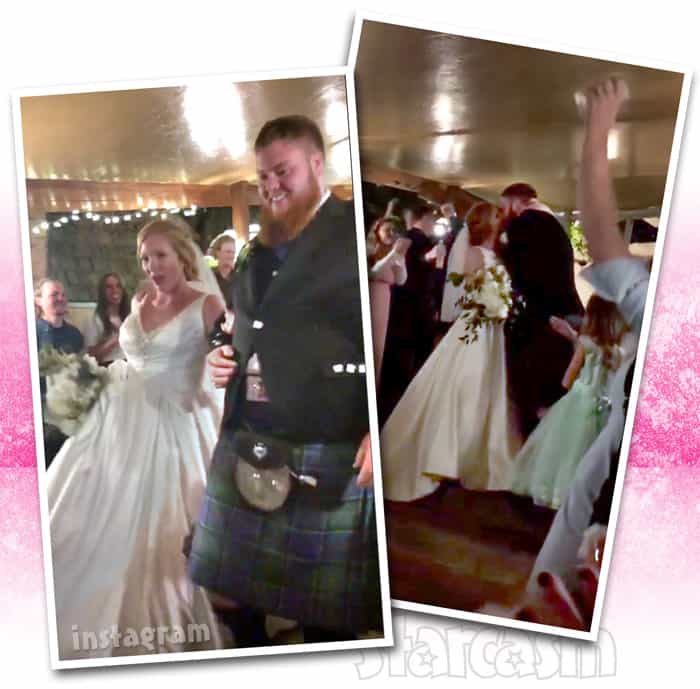 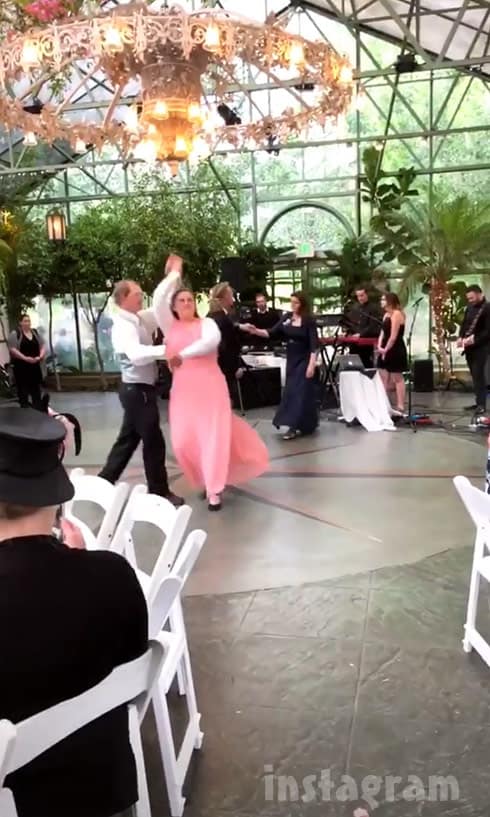 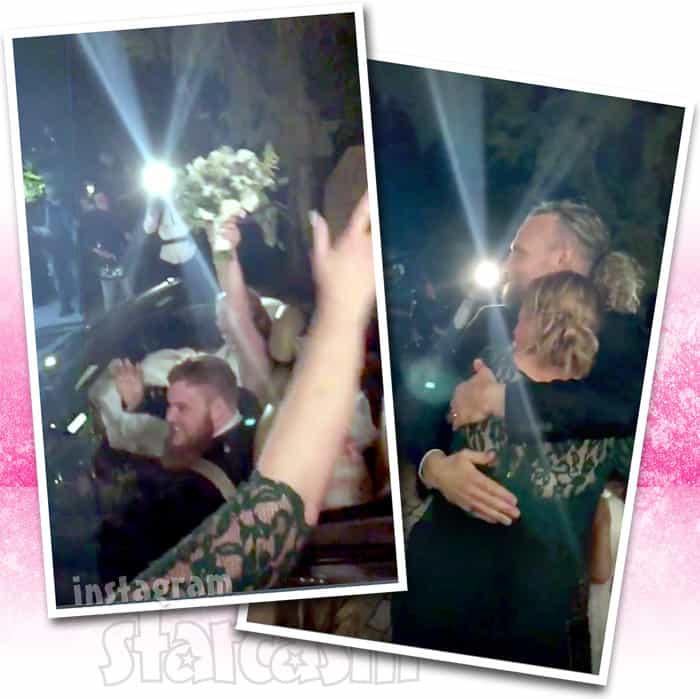 Congratulations to Aspyn and Mitch! It looked like an wonderfully joyous occasion (especially Aspyn’s good-timin’ and good lookin’ gal pal crew!), and I can’t wait to see it all when Sister Wives returns to TLC for an eighth season!

UPDATE – Here’s at least one of the sister wives’ looks from the wedding courtesy of Meri as well as another official wedding photo from photographer Kali Poulsen with her reflections on the experience:

When your outfit for the wedding weekend has a slight malfunction, you call on your LuLa friends and team mates to help you out. A HUGE thank you to @therealjessharmon and @lularoekimroylance for saving the day and hooking me up with this fabulous #LuLaRoeElegantDebbie super last minute! A million thank you's aren't enough! #LivingMyWhy #BecauseICan #BecauseOfLuLaRoe #LoveWhatIDo #LuLaRoeRetailer #LuLaRoeLasVegas #MyBestDays #ThatHatThough ???

I am still on cloud 9 after shooting Aspyn and Mitch’s wedding yesterday! It was featured on people.com today and I have been in tears multiple times at this amazing experience. Aspyn and Mitch were a dream to work with, as well as the TLC crew and everyone at La Caille. If you want to check out the article and a few more pictures, check out the link in my profile! #utahphotographer #sisterwives #beutahful #weddinginspiration #utah