For years, Silicon Valley has attracted the best and brightest tech developers. Unlike many large corporations, the male-dominated business favors young, creative minds. That’s made for a large population of unencumbered, driven guys who are too busy for relationships… But not for flings.

As a result, Silicon Valley is increasingly attracting a different variety of entrepreneurs: Sex workers who portray themselves as geek-chic.

Recently, CNN Money did an exposé on the thriving sex work business in Silicon Valley. Kitty Stryker, a social media marketer by day and sex worker by night, described herself as a “steampunk courtesan” and a natural-born nerd.

For her, sex work and social media just go hand-in-hand.

“Everything I know about social media marketing I learned doing sex work,” she said. “Currently I’m using Hootsuite a lot; I’m using Klout a little bit. I also use Twitter calendar, which is just this simple free thing, but it’s got very interesting analytics data.” 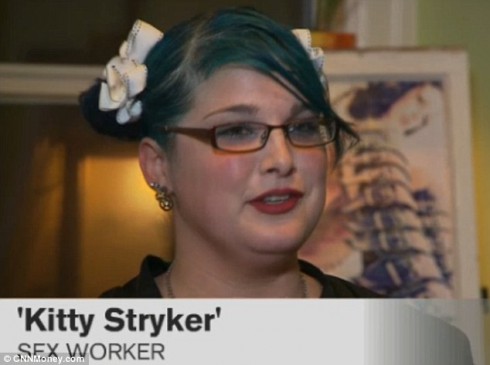 “When I’m doing a shoot or I’m doing a cam show, I will absolutely take pictures and put them out there and say, ‘Hey, this is what you’re missing out on.’ The more I tweet, the more folks end up in the chat room.”

But, just because some sex workers are now spending more time on social media websites than on street corners, it doesn’t mean it’s a new game in Silicon Valley.

“It’s one of Northern California’s oldest economies, and the one most closely linked with any boom-time — whether’s that’s gold or railroads or boy-geeks,” said Melissa Gira Grant, author of Playing the Wh0re, to Atlantic Wire.

It’s also difficult to ascertain how many sex workers are catering specifically to tech entrepreneurs in Silicon Valley. CNN Money cited San Jose — the “capital of Silicon Valley” — prostitution arrest statistics, which jumped 35 percent from 2011 to 2012.

Regardless of whether the numbers are really on the rise, one thing is true: Sex workers in Silicon Valley are nearly as social media savvy as the clients they serve.

Are John Corbett and Bo Derek getting married?