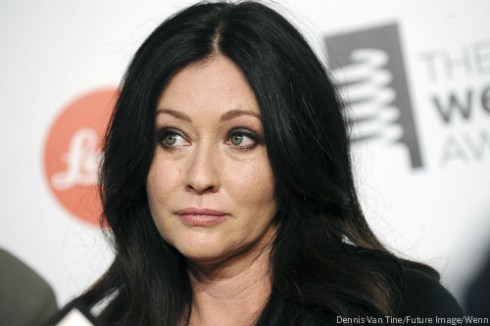 Shannen Doherty confirmed she is battling breast cancer after TMZ revealed the news in an article about the former 90210 star’s lawsuit against her business manager.

“Yes, I have breast cancer, and I am currently undergoing treatment,” Shannen, 44, told People. “I am continuing to eat right, exercise and stay very positive about my life. I am thankful to my family, friends and doctors for their support and, of course, my fans who have stood by me.”

The news emerged when TMZ obtained Shannen’s lawsuit against former business manager Tanner Mainstain. In the suit, Shannen claimed Tanner neglected to pay her insurance premium for 2015, during which time Shannen’s medical coverage lapsed and she didn’t visit a doctor.

After Shannen paid up and her insurance was reinstated this past March, doctors discovered “invasive breast cancer metastatic to at least one lymph node”–which had spread while she was uninsured. The Charmed actress said she is now unable to work because of her treatments, which will likely involve chemotherapy and a mastectomy.

Following the report, a representative for the ex-business manager said Tanner wishes Shannen a full recovery–but will “aggressively defend” claims that he “caused her to be uninsured, prevented her from seeking medical care, or somehow contributed to her cancer.”