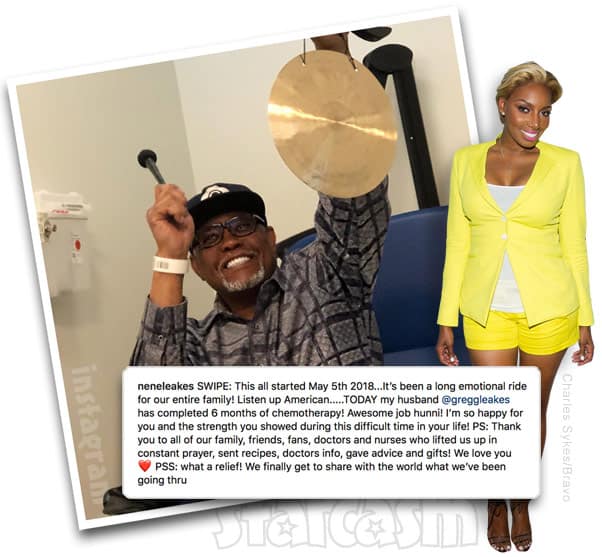 Gregg Leakes, the husband of The Real Housewives of Atlanta star NeNe Leakes, has reached a major milestone in his cancer treatment as he just completed six months of chemotherapy!

NeNe shared the good news with an Instagram gallery of video clips and a photo of Gregg ringing a cymbal celebrating the end of half a year of chemo. “This all started May 5th 2018,” NeNe began her caption. “It’s been a long emotional ride for our entire family!”

The reality star then expounded on Gregg’s accomplishment. “Listen up American…..TODAY my husband @greggleakes has completed 6 months of chemotherapy! Awesome job hunni! I’m so happy for you and the strength you showed during this difficult time in your life!”

In a postscript, NeNe offered up her gratitude to everyone else who helped Gregg and her get through those six months. “Thank you to all of our family, friends, fans, doctors and nurses who lifted us up in constant prayer, sent recipes, doctors info, gave advice and gifts! We love you ❤️ PSS: What a relief! We finally get to share with the world what we’ve been going thru.”

The Instagram gallery includes two videos — one featuring Gregg banging the cymbal, and a second in which he hugs the hospital staff present for the occasion:

Some of NeNe’s Real Housewives of Atlanta co-stars responded to the emotional post in the comments section.

“Congratulations sis!” Shamari DeVoe exclaimed. “??I’m so happy for Gregg! I can only imagine the joy you all feel. Love y’all! ???”

Gregg’s cancer battle has been going on for well over six months, however. He was initially diagnosed with stage 3 colon cancer last May after experiencing excruciating pain on Cinco de Mayo. Doctors operated on Gregg immediately, and he was hospitalized for 15 days.

Gregg and NeNe initially did not disclose the cancer diagnosis, but would eventually reveal that was the cause of his hospitalization as they considered whether or not Gregg should undergo chemotherapy.

“Chemo is not something that Gregg is thinking about doing at the moment,” NeNe said. “Obviously we hear all the report of people doing chemo and being very sick. So he feels like if there’s any other options that can take, I’d rather take those options and let chemo sit on the back burner for now.”

Gregg would later have a change of heart and begin chemotherapy treatments.

Congratulations to Gregg on fulfilling his promise to give cancer pure hell!

Stand with me as we give cancer pure hell by keeping it in check.. Cancer Sucks-“get the suck outta here”…