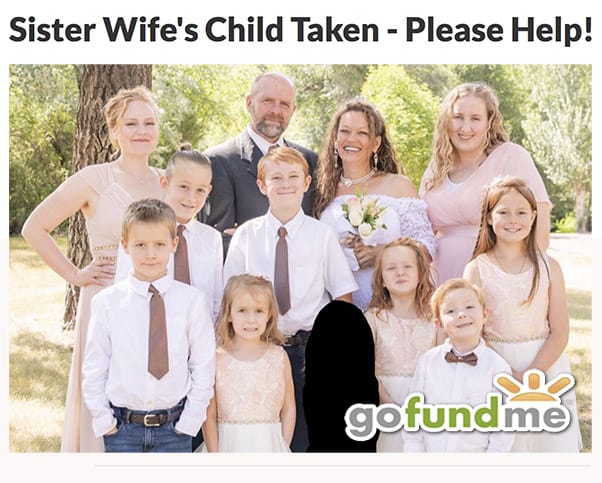 The Alldredge family from the TLC reality series Seeking Sister Wife joyously announced back in July that they expanded their family with the addition of a third wife named Donna. Unfortunately, the marriage had a negative impact on Donna’s custody battle for her three-year-old daughter. As a result, the family has started a GoFundMe fundraising campaign in hopes of raising $10,000 for legal fees associated with the custody battle.

The campaign is titled “Sister Wife’s Child Taken – Please Help!” and was organized for the family by someone named by Crabtree Mosfitt. It has already raised $1,715 of the $10,000 goal at the time of this post.

The campaign includes this message from Jeff Alldredge, which accompanied a photo of Donna and her daughter (blacked out) from the wedding ceremony in July:

Dear friends, we would sincerely appreciate your help. A travesty has happened to our family, and we are reaching out to all of you for prayers and support.

Many of you are aware that a short while ago we were blessed to add Donna to our family. This was a joyous occasion, but it was followed shortly after by severe prejudice and persecution against our way of life and, in particular, Donna’s specific family life.

Donna is currently entangled in a critical custody dispute on the basis of her decision to join our family. Sadly, this type of persecution is not new to people practicing plural marriage, and it has been the bane of many plural families for over 150 years.

The Alldredge family’s Facebook page shared a link to the GoFundMe on October 30. The post sparked a debate in the comments as some fans pointed out that Donna should have known that marrying into a polygamous family might have a negative impact on the custody of her daughter.

The Alldredge family and others responded by pointing out that the Alldredges aren’t breaking any laws, and that there have been similar cases filed recently that were eventually decided in favor of those practicing plural marriage.

One of the most eloquent defenders of the Alldredges were their Seeking Sister Wife co-stars the Brineys, who moved to Oregon in December of 2017 to avoid prosecution in their home state of Utah. Here is one comment from Angela DiGiovanni Briney:

I commend the Alldredge family for living their lives, even if this possibility was considered. It’s a real life example of the tyranny and oppression polygamists still face. That they are willing to stand up to it and fight it is far more respectable in my view than kowtowing and living their lives in fear of “what if?”

What progress would we make if we keep succumbing to unrighteous dominion? What progress would any other minority group have made to this day and time had they not been willing to put themselves on the line to effect change? They have secured their rights through dissent and rebelling against the system that oppresses. Usually, that comes with great sacrifice, to leave behind a better world for those that come after us.

#SeekingSisterWife The Briney family moves to Oregon, plus @Drew_Briney & Angela respond to criticism about asking children to lie in order to avoid being arrested for cohabitation in Utah: https://t.co/87uDeyxsqz pic.twitter.com/0q0BFw5PNw

It’s important to note that the Alldredge family now reside in South Dakota, but Donna lives in Maryland. She and Jeff first met via an online dating website, and it was always clear to Jeff that Donna may not be able to relocate to South Dakota any time soon.

“When we started courting we talked a lot about,” Donna revealed in a recent interview with Lyn Seeks Truth. (Full interview included below.) “We all knew that if this came down to a relationship that we were going to be in forever that I would continue to be living in Maryland and having a long-distance relationship.” She added: “It’s the way my life has to be for now, and we’re all okay with that.”

She later admitted that she would, of course, prefer that they all be able to live together right now, but it simply isn’t a possibility. Donna was asked about her current legal situation, but she was not at liberty to say anything about it.

Speaking of Donna’s current legal situation, we did some research on that.

According to court records, Donna and her former husband have been in and out of the courts over custody of their daughter for the past two-and-a-half years. Donna initially made a custody filing in June of 2018. There was a joint motion to dismiss filed on July 27 that was granted three days later.

The father filed a petition for custody in October of 2018. That case was dismissed in March of 2019.

Both Donna and her husband filed for custody in April of 2019, and that case is still ongoing. Donna is listed as the Defendant and Counter Plaintiff in the case, and on May 30 of 2019 the court docket lists a “Request for Substance Abuse Evaluation and Testing” filed by the Defendant. The Plaintiff filed an opposition on June 17.

On January 6 of this year, it appeared as though the custody battle was all but over. Here’s the docket entry:

Plaintiff and Defendant appear with Counsel. Parties have come to agreement in regards to Custody. Agreement placed on the record. Other matters to be handled at hearing on February 28, 2020. Counsel to prepare Order.

On April 8 of this year, the Defendant filed an Emergency Ex Parte Motion for Custody, which was denied the next day.

On August 14, which was after the Alldredge family wedding with Donna, there was an emergency custody petition filed. (I assume by the Plaintiff, but the docket does not say.) There are three supporting exhibits for the emergency petition listed that include the mention of Facebook and two websites that cover Seeking Sister Wife. I assume these exhibits were to show proof that Donna married into the polygamous Alldredge family.

On August 20, the judge granted an emergency custody hearing on August 24. There was a temporary custody order issued on August 27.

The custody battle is ongoing.

In some more uplifting Alldredge family news, Sharis Alldredge revealed in the Lyn Seeks Truth interview that she is currently pregnant!

I will wrap this up by including the full interview from the Alldredge family’s new YouTube channel: