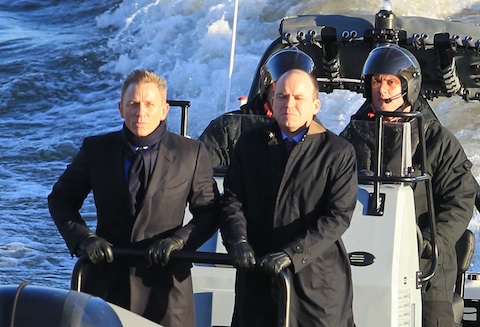 The very same hackers who exposed some of Sony Pictures’ darkest and most closely-guarded secrets–like, for example, what they really think of Angelina Jolie–managed to pinch the script for Spectre, the upcoming installation in the James Bond franchise.

If you’re thinking “Dag, yo, that sure was fast,” you sure are right. The darn thing was only announced a week and a half ago. Heck, they just started shooting the movie yesterday. (The image above comes from an action sequence filmed on day one.)

Well, so, no big deal. Right? Not that many people will bother to actually find and download the script. And, of those people, not everyone will read it. Right? Reading is hard work. And it takes time. And we don’t have any time to kill, in this busy, workaday world. We’ve all got jobs and kids and television to watch. So, who cares if the script leaked?

The answer: Some of the very same producers who were embarrassed last week in the Jolie debacle. The hackers also got the producers’ e-mail exchanges about Spectre, and the results are…not super.

In the words of Deadspin, the third act is “messy,” and screenwriters are trying desperately to overhaul it while production continues on the first two-thirds of the film.

Without getting too far into spoiler territory, the general criticisms are that the film doesn’t do anything new: it treads the same ground covered humorlessly by the last few Bond films, and campily by the Bonds of yore.

One executive’s e-mail reads “THERE NEEDS TO BE SOME KIND OF A TWIST RATHER THAN A SERIES OF WATERY CHASES WITH GUNS….WHAT DOES [the villain] HAVE UP HIS SLEEVE?” The same producer later wrote–of the entire third act–”WE NEED TO CUT 20 PAGES AND THIS WHOLE SET PIECE COULD GO.”

the “meanwhile” action for bond is simply fighting henchmen in many overblown and familiar sequences – helicopter, elevator shaft, netting. he’s trying to save the girl but there must be a more dynamic set piece to come up with that doesn’t involve myriad henchmen and [the Bond girl] while [the villain] is in another location.

And Hannah Minghella, who is the co-president of production at Columbia and appears to be an actual human being instead of a calculator in an expensive suit, offered perhaps the most damning criticism:

If this is the movie that resolves the last three films then the emotional significance of that idea for Bond seems only lightly served at best. He finds the Vesper tape but never watches it. He appears to fall in love again for the first time since Vesper but there’s no real emotional vulnerability there – why this girl? Why now? When he leaves with her at the end of the movie and throws his gun in the river has he gone for good or is this just a well earned vacation as is so often the ending of a Bond film. Does he feel some sense of completion that he finished the last mission M/Judy left for him? It’s hard to know what significance any of these final gestures carry.

Yikes. Hopefully the new screenwriting team can turn this ship around before it’s too late.

VIDEO: Chan Ho Park gave up and had the runs