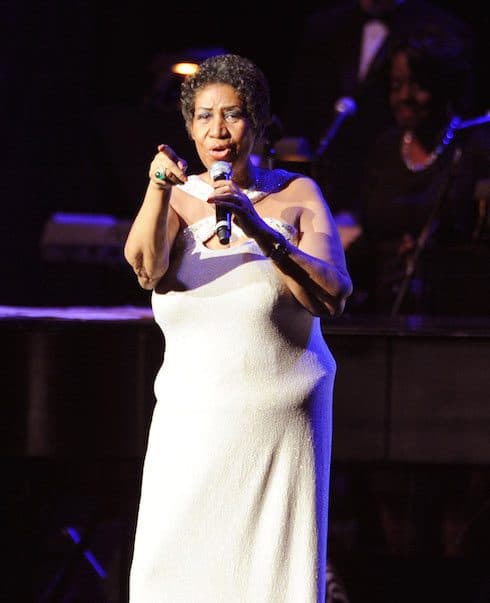 CELEBITCHY – RIP Queen of Soul: Aretha Franklin passed away in her Detroit home yesterday, surrounded by friends and family, at the age of 76. Franklin had been suffering from advanced pancreatic cancer, which is a horrible way to go — so let’s remember her for her iconic lifetime instead

JEZEBEL – In unfortunately related news, Fox News has apologized for their tribute video to Aretha Franklin…which featured a photo of Patti LaBelle. Even for the network accused of stoking American racism for a generation, this is a bad look

LAINEY GOSSIP – Rihanna and Donald Glover are working on a top-secret project together down Cuba way. Also Glover is performing at the fourth-annual Diamond Ball later this year. And he and Rihanna posed for a photo together in which Glover is shirtless and they both look happy and kind of mysterious and so naturally there’s a ton of gossip about exactly what they’re up to

REALITY TV – RHONY star Ramona Singer thinks Countess Luann didn’t stay in rehab for nearly long enough, and thinks her stint should have been for at least “two months”

DLISTED – Omarosa released another of her secret tapes: This one features Lara Trump, Erik’s wife, offering Omarosa a $15,000-per-month job to work for the Trump campaign and in the Trump White House and telling her the only thing she has to do for it is remain “positive” about Trump. Which is an awful lot of *public* money to be paid for that job — though, to be fair, staying positive about Trump is also maybe the hardest job in America right now

VOX – In 2017, CEOs of the 350 largest American companies made an average of $18.9 million dollars — or 312 times what the average worker made at those same companies. Keep those figures in mind the next time someone on social media tries dragging you into any political debate

THE BLEMISH – Demi Rose does look kind of like Kylie and Kendall Jenner morphed together; it’s her low-key-yet-aggressive thirst that really separates Rose from the Jenners (that and about 106 million Instagram followers)

THE ASHLEY’S REALITY ROUNDUP – Noah Brown from Alaskan Bush People married Rhain Merrill, his fiancée since 2016, on the two-year anniversary of the day they met, congrats! They tied the knot in a small & super-cute ceremony; check out the pics