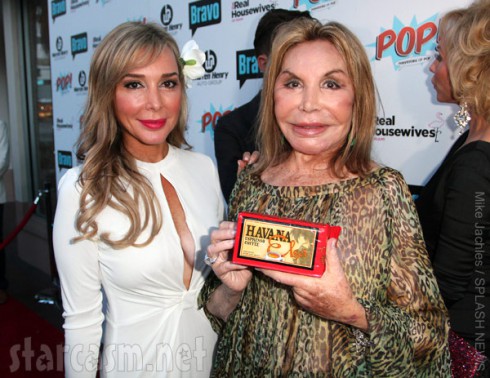 The cast of The Real Housewives of Miami held their Season 3 Premiere party at Lou La Vie in Miami Tuesday, but fan favorite Mama Elsa Patton was disappointingly not in attendance. Mama Elsa’s daughter Marysol Patton explained her mother’s absence to The Miami Herald‘s Madeleine Marr, revealing the sad news that Elsa is still recovering from a stroke she suffered back in March.

Marysol reveals that Mama Elsa was found unconscious on the floor of her bedroom by household staff. Marysol was contacted via phone and she immediately called 911 and drove to the house. “She was shaking and unable to walk or barely sit up and her eyes were fixated staring up to left,” Marysol said. “The paramedics carried her down the stairs wrapped in a sheet to the ambulance. She was rushed to the hospital for a brain scan.”

Marysol was informed by doctors that they felt Elsa needed to have surgery to alleviate the blood in her brain, which was believed to have been caused by Elsa hitting her head when she fell. Marysol consulted her cast mate Alexia Echevarria, whose son Frankie suffered brain injuries (among many others) in his horrific car accident in August of 2011, and eventually elected to have the surgery.

Mama Elsa was in critical care for several months after the surgery before being moved to a rehabilitation facility. She returned home in May, but continues to struggle with her recovery. “Right now mom is at home convalescing with a full-time live-in,” said Marysol. “It was a difficult road to finally get her home and back to her daily routines, the simplest things we all take for granted daily.”

Marysol also talked about the difficulty of trying to take care of her mother while also filming the third season of The Real Housewives of Miami, and says that’s the reason she took on the role of a “Friend” of the Housewives this season. “The production company was very flexible with me and allowed me to film around my schedule which involved hospital visits, coordinating mom’s move back home and my day-to-day operations of my company,” said Marysol. “I filmed what I could, when I was available in the role of a ‘friend’ of the Housewives.”

It’s unclear if Elsa’s medical issue and Marysol’s efforts to help will be included in the upcoming season, although The Miami Herald article says, “the show’s sassy matriarch will appear toward the end of the season.” The Real Housewives of Miami Season 3 premieres Monday, August 12 at 9/8c on Bravo.

We wish Mama Elsa continued success on her road to recovery! As with many fans of the show, Mama Elsa is our favorite cast member, and one of our favorite characters on television.