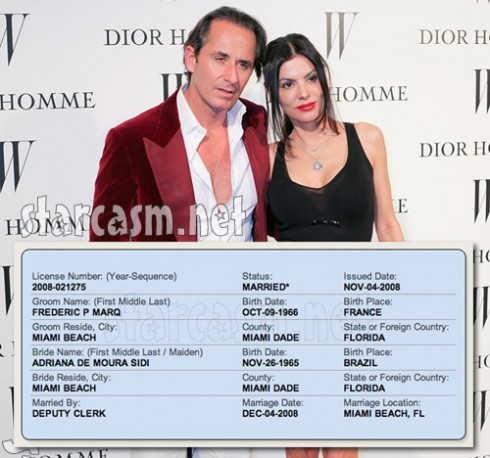 Bravo’s The Real Housewives of Miami is the latest reality show to have its “reality” called into serious question. Cast member Adriana de Moura’s storyline this season has been focussed around her relationship with Frederic Marq and whether or not (or more accurately, when) the two will ever actually get married. The dramatic second season finale featured the two deciding that they would tie the knot, and Adriana reaffirmed the couple’s plans on the Reunion Special.

But yesterday a marriage license surfaced showing that Adriana and Frederic are actually already husband and wife, having gotten married in 2008! Adriana and Frederic addressed questions about whether or not they were already married on Twitter with simple “Not yet” and “No” responses respectively.

Adding to the controversy is that Adriana said in Season 1 that she left her first husband Roberto Sidi after catching him cheating in 2006, when there are online records indicating she filed for divorce from Sidi in 2001 and it was granted in 2003.

Once word spread about the marriage license being found, The Miami Herald pushed the matter further and got a statement from Adriana de Moura’s publicist, Lynn Brodsky:

Adriana did get divorced in 2003, but her and Roberto tried to work things out and had a common law marriage until 2006. After breaking it off she then met Frederic in 2008. On a romantic whim after dating briefly, Adriana and Frederic went to the clerk’s office on their own with no friends and family, and were married. There was a discrepancy in the certificate – so instead of having the marriage fix [sic] or annulled, they decided to take a step back and hold off until they were truly ready. Adriana and Frederic are planning to have a beautiful (and proper) wedding this spring.

That sounds like a whole bunch of Bill Clintoning to me!

So what kind of “discrepancy” was there that theoretically means the document is invalid? “Marriage certificates are not valid by law if there is a typo on it. There was a typo on their certificate. I have no further comments at this time.”

UPDATE: When this issue was addressed on the show airing August 2013, Adriana explained that Frederic called off the wedding because her son wasn’t happy about the prospect of them being married. They kept this secret from her son for five years, and she was devastated when it leaked to the press. She says she doesn’t really feel married until she is married before God and the church.

The Herald guesses the typo is that Adriana’s maiden name is listed as “de Moura” instead of just “Moura,” but that is purely speculation. And given all the question marks surrounding her marital history (a source close to Adriana says there is an additional marriage we’re not aware of) the “typo” could be any number of things because who the heck knows what Adriana’s actual, legal name really is!

The Herald also approached Bravo about the discrepancy, to which publicist Ryan McCormick replied, “We were not aware that they were married.”

I think everyone is well aware that reality shows are all manipulated to a certain degree, but there is a line that can be crossed. Reenacted scenes, manipulated drama, and exaggerated feuds are one thing, but an entire premise turning out to be untrue crosses the line. (See: Breaking Amish and Storage Wars) So I think there is room for legitimate outrage among fans of The Real Housewives of Miami who feel duped by Adriana and Frederic, and possibly the network. (I find it difficult to believe they weren’t aware. There has apparently been discussion about the marriage license on various message boards since last year.)

What do you think? Does it matter if Adriana was already married, or is The Real Housewives of Miami basically the equivalent of a scripted soap opera featuring real people playing themselves? Could all reality programming be evolving toward a scripted hybrid like The Hills?

Pictures of Roman Polanski’s Alpine Swiss Chalet “Milky Way” in luxury resort of Gstaad, where he will be held under house arrest starting Friday