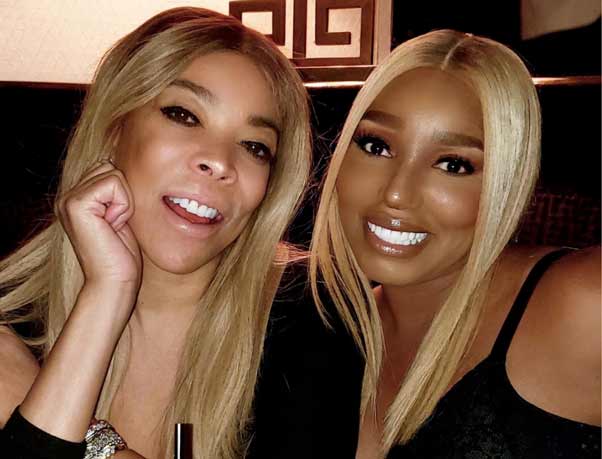 RHOA‘s NeNe Leakes has had a volatile frenemy relationship with television gossip guru Wendy Williams for several years now. Just when they seemingly mended fences and started hanging out in real life, NeNe made a faux pas that sent Wendy Williams on a public attack. NeNe Leakes and Wendy Williams may no longer be on good terms.

At the Real Housewives of Atlanta reunion Part 1 on Sunday, the women brought up Wendy’s pointed words against NeNe, but NeNe, who is no stranger to holding grudges maintains that they are now “neutral” in regards to each other. We’ll explore the history of NeNe and Wendy’s feuds and fragile friendship below.

The bad blood dates back to at least 2013

NeNe Leakes and Wendy Williams have and tension since 2013, before they were met. It started with an argument on Twitter about the saturation of reality TV shows. NeNe had been a reality star for about five years at that point, and was venting about the plethora of new reality shows coming out. Wendy responded to point out that the audience watches more reality series than sitcoms now. “You should have just kept your mouth closed,” Wendy told NeNe.

Of course this didn’t sit well with NeNe, and she vowed to never appear on Wendy’s talk show again. That was all just talk, however, as she continued to make appearances on the show.

In 2014, Wendy Williams criticized NeNe for “defacing” one of her Birkin bags. Birkin handbags by Hermès can cost from $40,000 tp $500,000 and can be very hard to obtain, even if you have the cash. NeNe, who says she owns quite a few of these rare items, shared a photo of one that had been decorated by herself and her husband with a lot of her catchphrases like “Close your legs to married men,” and “I’m very rich, B!tch.”

In a blog defending her actions, NeNe referred to Wendy as “Wendell,” and explained that the bag was a work of art she made to raise money for charity. “Wendy I am sure people think that I’ve done something to you, maybe we had a beef or I slept with your man but none of that is true! I’ve actually only been nice to you!” NeNe wrote at that time. “I gave you a beautiful black $3,200 Celine Phantom Bag to celebrate your 500th show but you haven’t spoken of that! But what you have chosen to do is constantly speak negative of me and lie on me! What you need to do is stop spewing hate! When it comes to gossip you are the lowest of the low! I know you hate because I turned down the chance to come on your Talk Show and I am sure you’re scared I will take your place (I know you have heard! Ummhmm wink wink) BE SCARED! I have a clothing line on HSN coming out in a few days and I know it must be hard for a black woman to support another black woman but you should try it sometime.”

In 2016, the beef involved Wendy’s husband

By 2016, NeNe was still referring to Wendy William as “Wendell” when she dished to lovebscott.com about a public incident involving both Wendy and her husband. She starts out the tea by claiming to have never had a problem with Wendy. She says at some point Wendy had been talking about her on her show ever week, so she called her out. Ever since then, NeNe claims, Wendy had remained silent about the RHOA diva.

She goes on to describe an incident that happened between them at a 2015 event called the Women’s Expo. The two women were supposed to having dressing rooms next to one another. When NeNe arrived, however, she was informed that Wendy’s then-husband Kevin Hunter asked NeNe’s dressing room to be moved. That was a bit shady, but things escalated even further from there.

How NeNe and Wendy became real friends in 2019

In 2019, after Wendy’s marriage to Kevin Hunter ended, she decided to make amends with NeNe. On an appearance on Watch What Happens Live with Andy Cohen, Williams recounted that she had a moment where she wondered why they had been fighting.”I called her up and was like, ‘Look, I don’t know what your problem is with me, or me with you, but where are you now? Let’s have dinner.’ And it was such an easy … such a good conversation,” Wendy said of how they became friends instead of enemies.

Why did Wendy turn on NeNe?

Despite their fun dinners last year, Wendy seemed to go for blood with NeNe this year after NeNe FaceTimed when all of her crew was around her and tried to get her togo live on Instagram. This lack of respect on NeNe’s part led to Wendy belittling on NeNe on her talk show. She had quite a monologue about why she thought was above NeNe and the Real Housewives in general. She described what NeNe did was an “ambush.”

“You know I don’t have face or time for FaceTime, period,” Williams said on her show in April. “If I don’t do it for my own parents of the show, why would I be doing it for someone over there? I like NeNe, but she’s still an over-there person to me. I felt, honestly, here’s where the ambush came in.”

“I made it very clear, I am not a Housewife,” Williams continued digging the knife in. “Sorry, my career is a bit … different … than being a Housewife. I don’t need that kind of attention. Like, I know I make this look easy and I know I have my ratchet ways, but the fact is I worked 35 years of my life to sit here for 11 seasons … I’m not slumming for being some add-on out the suitcase for some Housewife. And yeah, for me, that is slumming. For where I am.”

Wendy said she hung up on NeNe and, at the time of her talking about this in April, had not spoken with NeNe since.

What happened on the Reunion?

The discussion about Wendy Williams on the reunion came up when host Andy Cohen asked NeNe whether or now she was still friends with Wendy. This opened up the arena for the other women to voice their opinions.

Kenya Moore states that she didn’t think their relationship was “real friendship.” Kandi Burruss added that she felt like the friendship with Wendy was “strategic” decision on NeNe’s part.

“Wendy is very beneficial as her friend. She’s on a major platform,” Kandi explained. “[NeNe] can feed [Wendy] information so that she can say it to the people and so that it favors NeNe. So it’s easy for me to see why she doesn’t want that friendship to go totally under the bridge.”

“Clearly this woman got online and she was talking about her basically like a dog,” Kenya Moore pointed out. “She was saying the most degrading things. And if that was someone who is truly your friend, why would she go on her platform and basically say, ‘I am Wendy Williams. That is why I am the Queen of Daytime TV. And you don’t come for the queen.’ She doesn’t think anything of you!”

“If anybody else would talk about NeNe like that, she would have went in,” Burruss said, which is a very good point. NeNe’s been very vocal about perceived slights from the women on the show. Her feud with Cynthia Bailey over similar issues was a major plot point this season.

Are NeNe and Wendy friends now?

When confronted by the women on the reunion about what Wendy said about her, NeNe did not react negatively. She even went as far as to say that they were “okay.”

“I just assume we’re in a neutral place, that’s all I can tell you,” NeNe said. “It’s just neutral, we’re okay. We’re okay.”

“When Wendy and I got back together, the one thing I said to her is, ‘Anything that happens to us, I’m going to come to you. I’m not going on social media,'” she explained. “So with that said, I’m not going to discuss our friendship amongst these girls,” Leakes said. “Now, they can say what they feel is strategic and what they don’t think is strategic. I don’t need Wendy Williams, honey, because you forgot who the f— I am. I don’t need Wendy for anything.”

This April, after the taping of the show, but before the Reunion aired, NeNe published a video on her YouTube channel discussing how her friendship with Wendy Williams was brought up on the show. NeNe mostly iterated what she said on the show, that she did not want to talk about her relationship with Wendy publicy.

“So, I don’t feel that I need to talk about our relationship on a public platform because I talk to her personally, OK,” NeNe said. “So, I don’t even know why I need to sit on that show, Real Housewives, and talk about why I did not go public with me and Wendy’s relationship.”

NeNe is definitely implying here that she and Wendy are on speaking terms, but she is keeping their situation more private than Wendy did when she blasted NeNe on her show last month.