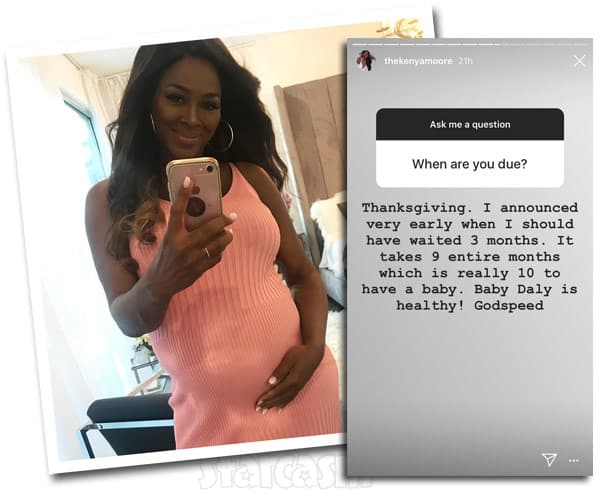 It has been almost seven months since former Real Housewives of Atlanta star Kenya Moore shockingly revealed at the Season 11 Reunion that she and husband Marc Daley would “definitely be welcoming a boy or girl in late this year,” and now we FINALLY have an actual due date for Lil Twirl!

Kenya shared the due date, and addressed the fact that she made her pregnancy announcement while apparently just a month after conceiving, in an Instagram story Q&A with fans. “When are you due?” one follower asked.

“Thanksgiving,” Kenya replied — which would mean November 22. “I announced very early when I should have waited 3 months,” she admits. “It takes 9 entire months,” she continues, “which is really 10 to have a baby.”

Kenya’s Reunion pregnancy announcement aired in April, but was filmed in the middle of March.

She finished her response by sharing a health update on Lil Twirl. “Baby Daly is healthy!” she wrote.

Another follower asked Kenya whether she was having a boy or girl. “We won’t know the sex of the baby until the baby is born,” Kenya revealed. “We want it to be a surprise.”

Kenya also revealed that there will have a baby shower in a couple weeks before tackling the tough question of whether or not she is ready to have a baby — the 47-year-old former Miss USA‘s first.

“No!!!” Kenya admitted along with an LOL. “I have no nursery and I am trying but brain is cloudy ??‍♀️” 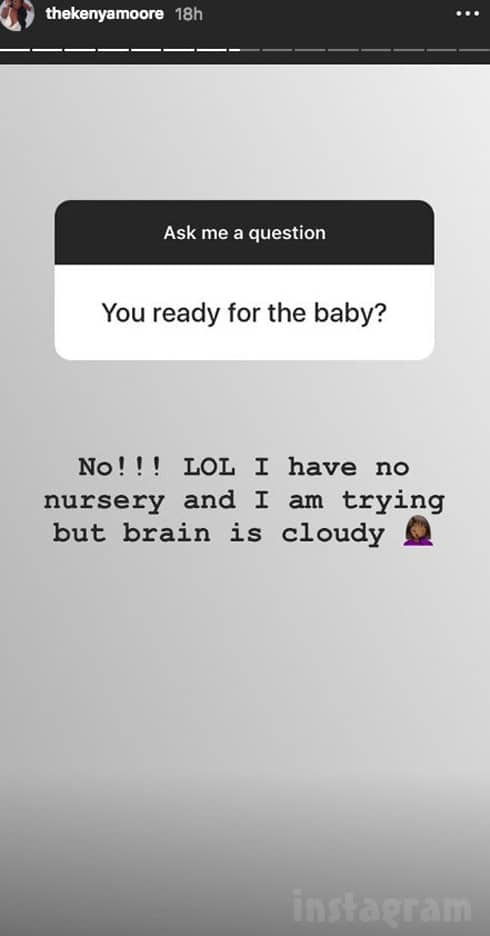 Unfortunately, The Real Housewives of Atlanta viewers will not be seeing Kenya’s pregnancy journey or the birth of Lil Twirl as it was recently confirmed that she would not be returning for Season 11. According to a production source, Kenya chose to walk away from what had become “messy” and contentious contract negotiations over which parts of her life she would be allowed to keep off-limits.

“I have decided to take this season off to focus on my high risk pregnancy in a healthy and drama free environment,” Kenya told The Daily Dish in a statement. “I thank Bravo for this amazing platform that has allowed me to grow, flourish and appreciate the value of what is truly important in life.”

Kenya’s statement continues by expressing appreciation for her fans: “And to #TeamTwirl: Thank you for your loving and relentless support — you will see me soon!”