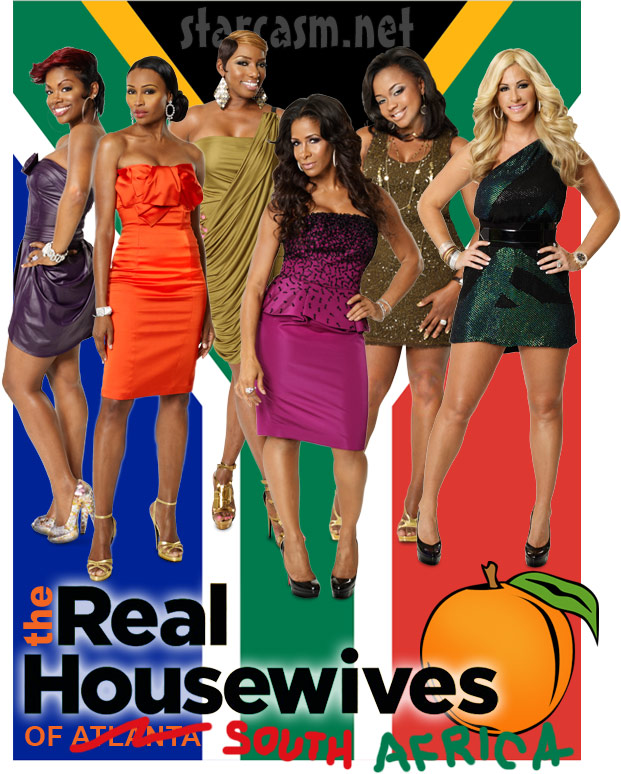 The peaches of The Real Housewives of Atlanta have reportedly packed their bags and relocated to a new South, namely South Africa! According to the word on the street Bravo has footed the bill for yet another Housewives group vacation in the spirit of RHONYC’s “Scary Island” and this season’s Sex and the City inspired trip to Morocco as well as RHONJ’s return to Italy and the upcoming felonious trip to the Dominican Republic.

According to Straight From The A, Kim Zolciak will remain in the States to take care of her newborn son KJ while RHOA veterans NeNe Leakes, Sheree Whitfield, Kandi Burruss, Phaedra Parks and Cynthia Bailey will all be making the trip. (There has been no confirmation one way or the other if newest cast addition Marlo Hampton made the trip. Could it be that her criminal past kept her grounded?)

In addition to the “word on the street” the trip was seemingly verified by Kandi Burruss on Twitter. Hilariously the first indication something was up came with her response to a July 27 tweet by Austin Orenstein from Valdosta, Georgia who wanted to know if she was going to be at a particular concert that evening in Atlanta:

@Kandi in Atlanta today… You wouldn’t by chance be going to the kings of leon concert would you? 🙂

To which Kandi (the big Kings of Leon fan?) responded:

@austinorenstein no. I’m leaving the country tomorrow so I have a lot of last minute errands to run.

Later that day Kandi announced she was canceling that evening’s edition of her radio show, “Kandi Koated Nights” and when asked why she answered:

The next day Kandi seemingly revealed that the duration of the trip would be right around seven days:

Well, my flight is about to take off. I won’t be tweeting that much for a week. Don’t miss me too much! Lol

Later Kim Zolciak verified via Twitter that she was staying put here the US with her well-wishes for cast mates Sheree Whitfield and Phaedra Parks:

I don’t know how I feel about the “cast vacation” trend. On the one hand it’s great to see the ladies made to interact together in a strange place for an extended period of time, but on the other hand it seems a bit forced and fake. Watching Kandi and Kim interact on a tour bus is great entertainment. Watching Phaedra Parks and NeNe Leakes duke it out in South Africa? That just seems a bit ridiculous and not really what I would call “reality” television, you know?

What do you think? Are the cast vacations unnecessary and a bit too much or a fresh and entertaining addition?