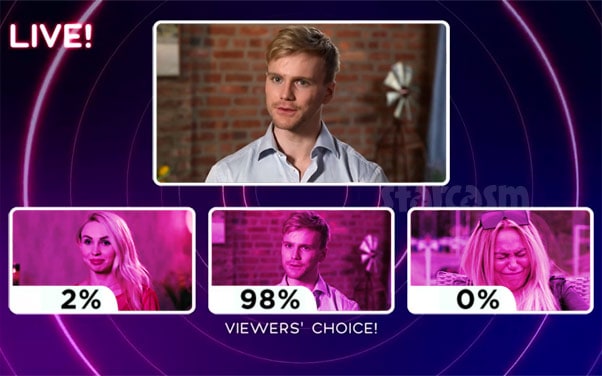 It’s hard to find a bigger fan of Jesse Meester than Jesse Meester, but TLC may very well have him beat. The network continues to find creative ways to keep the former 90 Day Fiance: Before the 90 Days star on the network. The Dutch personal trainer, philosopher, and coffee industry mogul was invited back to appear alongside Darcey Silva for a second season of Before the 90 Days, and he was even invited to Season 3’s Couples Tell All to offer up his take on Darcey’s relationship with Tom Brooks.

Earlier this week, Jesse was featured as part of TLC’s What Now? series in which he was shown dating a woman from New York City named Bianca. That relationship didn’t work out, and TLC saw the opportunity to bring Jesse back as part of their new quarantine-themed dating reality series Find Love Live.

“When the opportunity to appear on Find Love Live came along, I thought it was an interesting avenue to explore and see if I could meet someone,” Jesse tells People in a statement. “Being quarantined at home shouldn’t stop up us from trying to make connections.”

Here’s is Jesse’s intro video, which includes quite a bit of his dating stories with Darcey and Bianca:

After a couple of rocky relationships on #90DayFiance, Jesse's looking for romance this Sunday on #FindLoveLive! Interested in connecting with him? 😉Go to FINDLOVELIVE.COM for more info about Jesse and other singles. And don't miss #FindLoveLive Sunday at 11/10c!

“My name is Jesse. I’m 26 years old. I’m a personal trainer and I live in Amsterdam,” Jesse introduces himself in the clip. “Three years ago, I met Darcey online. She reached out to me, and then we started talking. I was, like, ‘Wow!’ there’s a connection here. And we spent six weeks together in Amsterdam.”

At this point in the video we see some of the memorable on-screen moments from Jesse and Darcey’s ill-fated romance, including Jesse meeting Darcey at the airport with a banner that somehow included a photo of himself at the airport to meet Darcey. We’re also shown the infamous proposal scene in which Jesse gets down on one knee and offers Darcey a promise ring.

Jesse continues his recap: “But once I started spending time with her, I saw a side of Darcey which I didn’t like.” The video shifts to a montage of the Jesse and Darcey poop show that included Darcey’s infamous wine drinking scene as well as the argument that resulted in Darcey’s oft-quoted line: “You don’t love me! You never did! You liar! You LIAR! Get out of my life!

“Our relationship was a disaster,” Jesse reflects.

From there, we see a segment from his What Now? episode with Bianca. It’s pretty awkward, and I won’t bother typing up a recap.

At the end of the clip, Jesse is shown heading back to Amsterdam alone.

For those of you curious to know more about the concept of Find Love Live, here is the description from the network’s press release announcing the series:

During each episode of FIND LOVE LIVE, one pre-selected “singleton” will be given the opportunity to “interview” and flirt with three potential suitors live, via video, all in the hopes of finding Mr. or Ms. Right. America will also chime in via Twitter and play the role of matchmaker; viewers will be encouraged to cast their votes in real time on who they think should be selected for the virtual date using hashtags for their favorite match. Host Sukanya will serve as part referee and part cupid throughout the process before the singleton makes their decision. Once the choice is made, the couple will embark on their first virtual meet up, to be shared with viewers in the following week’s episode. Love is loud, love is crazy and just maybe, love can be found with a little help from America, the internet and live TV!

Side note: @JennyMcCarthy is now on my list of Top 5 people I want to sip wine and watch #BT90D with! 💏📺🍷💃🏼 pic.twitter.com/JkadD2lPh1

“The runaway success of relationship programming like the 90 Day Fiancé franchise proves that the eternal story of love, of finding ‘the one,’ continues to captivate viewers,” TLC President and GM Howard Lee said in the release. “Even in the days of social distancing, people want to make a meaningful connection and, hopefully, end up sharing their lives with that special someone. And with the country staying home, what better way to celebrate love and togetherness, than helping singles find their match virtually and for the rest of us to root for them in the process.”

If you are interested in virtually dating Mister Meester, here’s the link to fill out an application. Darcey, if you are reading this, PLEASE do not apply!

BEFORE THE 90 DAYS Jesse wants women to stop sending nudes, asks ‘why so nasty about Darcey?’