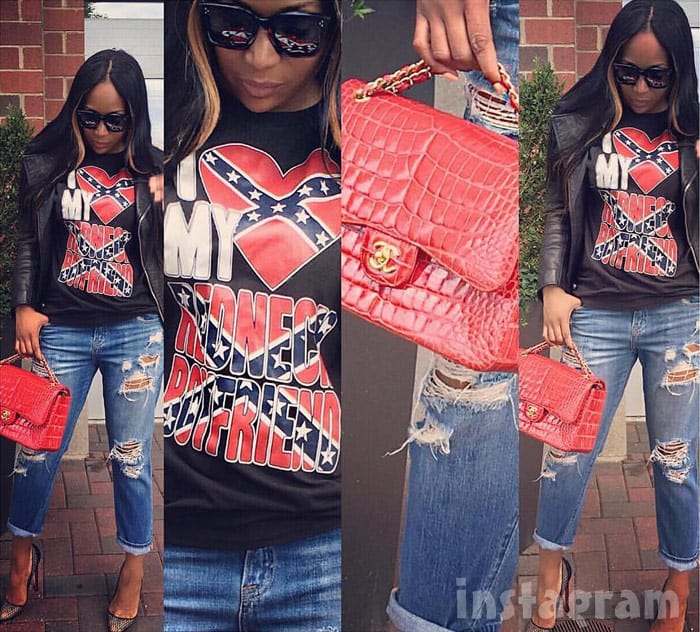 Official friend of The Real Housewives of Atlanta Marlo Hampton was invited to the NASCAR Sprint All-Star Race in Charlotte, NC yesterday. In “honor” of the event, Marlo shared a photograph of herself (above) earlier today wearing a “I ♥ My Redneck Boyfriend” t-shirt in which the heart and “My Redneck Boyfriend” were made out of Confederate flags. The photo, which Marlo hash tagged with #I♥MyRedneckBoyfriend, immediately sparked outrage among Marlo’s Instagram followers, and she returned to the social media site to share an apology video.

“Please accept my sincere apologies for any offense that was taken by my previous post,” Marlo captioned the video below. “Please watch this video to understand my point of view,” Marlo continued. “It was not my intention to hurt or disrespect anyone. I truly respect all of your opinions and point of views. Thank you to @c_brewton for inviting me to my first NASCAR experience, [I] opened my eyes and I learned a lot. We live in a very big world and while not all point of views will be understood they definitely should be respected. Again, my deepest apologies.”

“The post I posted earlier, I truly apologize for posting that post of the Confederate flag,” Marlo says in the clip. “Once again, I can’t even apologize enough. That was so stupid on my behalf. That was poor thinking and I truly, truly do apologize for anyone I offended.” Marlo then asks her friend Catherine Brewton what her thoughts are on the t-shirt scandal and Marlo’s apology. “I think that people always assume the worst,” Catherine says. “You made a comment before you posted the photo that you just are going to love who you love, so I just would say that we should not always assume the worst and give people the benefit of the doubt — to not always think that they’re being harsh, or there has a negative connotation to it. So, again, I think [your] apology should be accepted, and we should move on. There’s definitely bigger things that we should be discussing outside of somebody’s t-shirt on a Sunday afternoon. Blessings to everyone.” Marlo finishes the clip by repeating her apology. “Once again, I truly apologize. I love you guys. Love who you want to love. Freedom of speech, this is America. Love you guys.” Here’s a parting shot of Marlo Hampton enjoying her first NASCAR event: 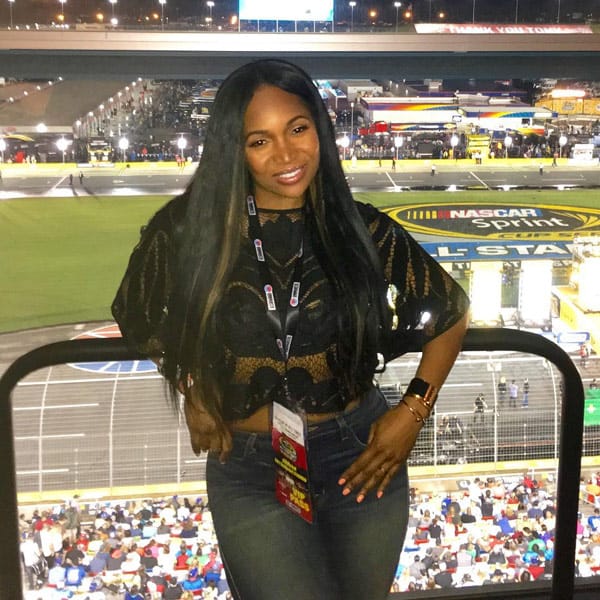